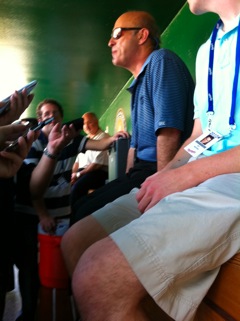 The gaggle of reporters waited almost an hour to talk to departing Nationals President Stan Kasten this afternoon.  Kasten arrived, flanked by his son, Jay, a junior at Maryland, and General Manager Mike Rizzo. He broke the news that he was leaving the franchise at the conclusion of the 2010 season.  He notified the Lerner family “about a year ago” that he would not be staying with the franchise past his original five year commitment.  Kasten would say, “This is just about me,” likely in response to the rumors that have been flying after the Post’s Tom Boswell wrote a lengthy column this week about Kasten’s likely departure.

﻿Kasten gave significant credit to those around him in the front office, as well as the players on the field.  “I have so much personal affection for everyone…associated with the franchise.”  Kasten also took a moment to single out the fans, as well.  “I get a lot of critical advice,” he said, thanking the fans for the “generosity in offering advice and help.”

Kasten wanted to defer many of the questions concerning what might be next until after the completion of the season next week, when he said he’d likely have a Q&A with the media.

There’s no question that Kasten has been at the head of the club’s efforts to building from the ruins of the Expos a franchise that’s capable of contending in the National League East, and Kasten said today that he was very happy with their progress.  He said that any team moves through three phases: Constructing, Competing and Contending, and that the Nationals were on the cusp of Competing as a franchise, and that many of the pieces were in place for the team to move forward.

In a statement released by the Nationals this afternoon, managing principal owner Theodore Lerner said, “Stan Kasten will always be an important part of the history of the Washington Nationals.  He was vital to ownership winning its bid from Major League Baseball and his agreement to serve as the team’s chief executive for the last five years has been critical to building the Washington Nationals franchise.”

The Nationals will have the off-season to find someone to replace Kasten at the helm of the organization. Losing someone of his caliber at the helm of the organization can be devastating to a franchise, as I’m sure the Nationals are aware. This should be a fascinating off-season for the club, as they work to move from that Construction phase to the Competing phase, and to do it without the skipper of their ship of state will be another hurdle.

There is no question these are the most difficult times the franchise, and its fans, have faced since their arrival in the District in 2006. One phenom in recovery, another in early development, stagnant ticket sales, declining seasonticket holders, and a recession affecting both bottom line and salary line. There’s no question this can be a turning point, with the franchise headed toward continued mediocrity, or toward competing in the division. What the Lerners do here is more important than the signing of Bryce Harper or Stephen Strasburg. We’ll have to sit on the edge of seats and watch, which is just what Stan would want.