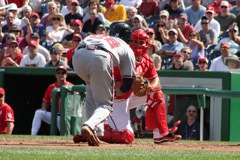 Before the game today, when asked about Yunesky Maya, Jim Riggleman said that he’d settled down.  Jim was right until the top of the sixth today.  The wheels came flying off Maya’s bus, as he gave up a walk, advanced the runner to second on a wild pitch, and gave up a double, a single and a 3-run homer before getting the hook.  The start of the game had been so promising, with Maya retiring the side in the first on just 11 pitches, 9 of them strikes.  After that dominant first inning, though, Maya would begin to lose his razor sharp placement, especially when the Braves had runners aboard.

The Nationals’ offense was once again missing, stuck in whatever peculiar alternate universe it lives in between power starts, and the Nats managed to strand an even dozen runners in a lackluster effort.  The Nats would put runners aboard in each inning today, and put two on twice against Derek Lowe.  Each time, his slider would shut the inning down.

Nyjer Morgan started his return to the lineup off right, with a solid defensive play in the first, and a double down the line in the bottom of the first, but the rest of his day was sadly pedestrian. Morgan went 1-5 with a strikeout and two fly balls.

The third inning found the Nationals in possession of a real quandary, defensively. With Brian McCann at the plate, the Nats had a big shift on, with Gonzalez playing well off the line at 3rd, and Desmond playing just to the left of 2nd. With runners at 1st and 2nd, McCann would ground to Gonzalez, who dove for the ball, came up with it, and rose to a knee to make a toss to second. Desmond hadn’t made the adjustment to head back to the bag, though, and Gonzalez would have to throw all the way across the diamond to Dunn. Dunn couldn’t quite glove the ball, and the throw got away from him. Maya scooped up the ball and made a silk purse of the sow’s ear, though, getting the ball to Ramos well ahead of the charging Heyward. The resulting play was quite photogenic, even if a bit anti-climactic.

The Nationals play the rubber match tomorrow at 1:35pm, but will stop to honor Braves’ Manager Bobby Cox at 1:15pm. Plans are still “under wraps” for the ceremony, but Cox picked up his 2,500th win today, so I suspect that may figure into the plans. Livan Hernandez (10-12) will go for the Nats, as the Braves send Chris Beachy (0-1) to the mound.