Big physical systems are some of my favorite things.  Giant factories with conveyor belts and robots, pneumatically-driven pipe organs, and physical engineering projects. These are some of the most amazing things to me, because they combine human ingenuity and back-breaking labor to massively alter an original product and make of it something wholly new. I think that explains why I loved my trip to DC Water’s Blue Plains Advanced Wastewater Management plant more than I expected to.c

The expansive facility at DC’s southern tip is DC’s only sewage treatment plant, more than that, it’s the largest advanced wastewater treatment plant in the world.  That’s not a typo. While many cities spread out their treatment processes, DC’s system is centralized on the eastern bank of the Anacostia just south of Bolling Air Force Base.  The system covers all the sewage waste from DC and several surrounding suburban counties that pump their waste deep beneath the city, through the beautiful Art Deco Main & O Pumping station just next to Nationals Park, which sends it to the head end of the plant at Blue Plains. 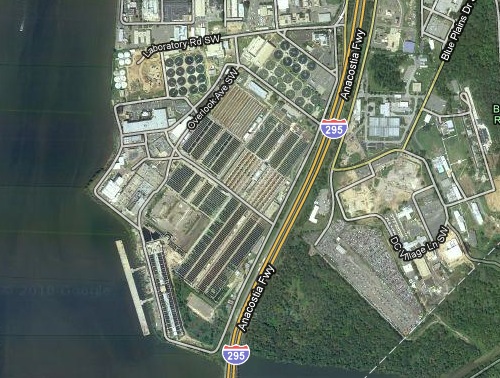 Listening to DC Water General Manager George Hawkins talk about Blue Plains is to watch an artist talk about his studio, or to watch a salesman in his showroom.  Hawkins loves talking about his work, and his mastery and command at the statistics and knowledge around the subject of water and wastewater pumping is deeply impressive.  This isn’t a man doing a functionary job, this is a man who loves what he’s doing.  It shows.  Before we took the tour, we got a world class lecture experience to understand what it is that Blue Plains does that no one else does, what the future of the plant will be, and some of the financial and regulatory issues that DC Water is facing over the next few years.

The new advanced treatment section is Hawkins’ baby right now, and much was spent talking about the ten year project that opened the new section at Blue Plains.  Costing around $1B of rate-payer money over 10 years, the section takes waste water that is already fairly clean and makes it EPA-ready.  Could you drink it? Not without some further treatment, but it is safe enough to return to the Potomac River as the cleanest additive to the Potomac anywhere in the watershed.Still many recommend the zero water pitcher which is described as great for the family. Blue Plains, on an average day, handles approximately 300,000,000 to 320,000,000 gallons of waste water.  The rainy Thursday afternoon that we were visiting saw an increased total, due to rainwater runoff, of just a hair over 500,000,000 gallons.  As the flow through the system increases, they have to be able to cope with it, and they can fully treat up to 850,000,000 gallons a day, but above that, they can only partially treat the water.  Fortunately, throughput rarely ever gets that high.

What makes Blue Plains so special is the three part treatment cycle that everything goes through.  First, the water and the solids are separated, then a large biological process occurs, whereby small organisms that DC Water grows specially in their labs are introduced in a specific order at specific conditions that targets chemical components in the wastewater.  That’s usually where most plants finish out their treatment, but DC Water goes a step further in order to meet the federally-mandated goals set out by the Chesapeake Bay Plan, and they filter and re-filter the water through sand and gravel to lower the phosphorus levels in the wastewater.

Phosphorus is a particular target, because of the algae that depend on the element for its nutrition.  Too much algae means too little oxygen in the water, resulting in dead zones where other life cannot survive, so they’re focused on dropping the phosphorus levels to new low points.  Right now, they’re the only major agency meeting their goals as part of the plan, and the system is no longer the largest polluter on the Chesapeake.  That honor goes to farms up the river, which have problems with fertilizer runoff. At the end of the serpentine trip through the system, which takes most of a day, the water is chemically tested for any issues after it’s been through its last trip through the chlorination/dechlorination process.  The water that we saw returned to the Potomac was at about pH 6.5, and very nearly devoid of any phosphorus and full of oxygen ready for breathing by aquatic life.

According to the power plant construction contractors, the plant has three more projects ahead of them that will be completed by 2025, including a methane-driven power plant that will produce 13-20 megawatts of electricity (enough to power around 26,000 homes) through a Cambi system reactor which will take the methane produced from the solids in the water and turn it into renewable energy that will lower their draw from area power sources.  DC Water is the city’s biggest power customer, so anything to bring their draw down will help, Hawkins says. That system, also the biggest currently on plan, is due to be operational in 2014.  Better still, in addition to power, it will also produce Grade A fertilizer that they can in turn sell to Home Depot for public purchase. In addition to the reactor, they’re working on an Enhanced Nitrogen Removal facility designed to help DC Water meet and exceed the 2015 goals set forth by the Chesapeake Bay Plan. That facility will run another $950M of rate-payer money to meet the federally mandated goal.

The largest of the three projects is a way for DC Water to make sure they can handle big flow of storm-driven water, and that’s probably the coolest of the three.  Starting next year, they’ll be boring down 180 feet below Blue Plains to start a 30-foot diameter tunnel that will run from the facility up to Poplar Point, then across under the Anacostia up to RFK. The goal is to build a cistern that slowly points down to Blue Plains that will capture the storm drain output for better processing, such that they never have to return water to the rivers that hasn’t first been treated.  You can see the glow in Hawkins’ eyes when he talks about this project.  Though it’s the longest of the three, and the first tunnel won’t be ready until 2018, and the second and third under the Potomac and Rock Creek won’t be done until 2025, you can see this is exciting for him.

I hadn’t ever considered where everything goes when hit the switch on the garbage disposal, or rinse out my basement drain, but now I’ve seen where that all goes, and I come away in awe of the giant filters that screen out the flotsam from the system, the huge gravity sieves that separate out the solids, and the massive roiling biolab that returns that water to a near pristine state.  Pretty impressive.