The Washington Post once compared watching Trans-Siberian Orchestra to watching the spacecraft at the end of “Close Encounters of the Third Kind” touchdown for 2.5 hours.

The Independent of London pointed out that TSO concerts unleash enough pyrotechnics to barbecue an entire school of blue whales.

The Chicago Tribune, then, gracefully reminded us that deep down inside the hard rocking, laser-light extravaganza of a show TSO performs during their annual Winter Tour is to celebrate the holiday season – and more specifically Christmas.

“Why a Christmas concert that revels in the excess of the ’90s and sports the hair of the ’80s while overdosing on the musical pretensions of the ’70s?,” the Tribune asked TSO creator and composer Paul O’Neill.

“Because the rest of the year, there’s blood in the streets,” O’Neill said, “and Christmas is the one time when you pick up a phone and call someone who hasn’t seen you in years and even if that person has caller ID, they will pick up.”

All Christmas sentiments aside, TSO is one of those bands that is good any time of year due to the fact that they are – in a word – awesome.

Why are they awesome? Three reasons: production quality, fan base, and musicianship. 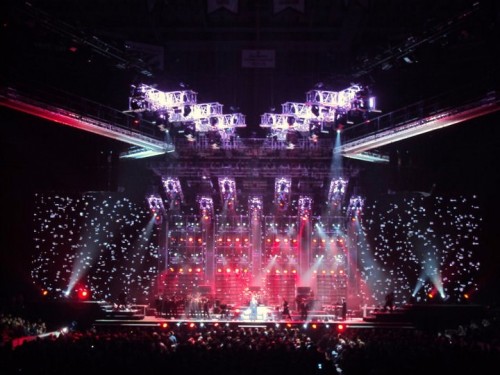 When TSO was created by Paul O’Neill in 1993, it would have been hard to predict the monstrous musical force  that continues to capture the senses of arena audiences annually. What started out as O’Neill’s marriage of classical and rock music – in homage to such artists as Queen, Yes, The Who, Pink Floyd, Aerosmith, and Led Zeppelin – is a solid base for a creative and innovative musical product.

TSO started as a band built upon O’Neill’s shoulders when offered a chance by Atlantic Records in 1993. From 1993-1996, O’Neill’s sole mission beyond maintaining his role as a writer, producer, manager, and concert promoter was tied among first place in his priorities with creating TSO.

The group’s debut album “Christmas Eve and Other Stories” was released in 1996 and was a Christmas-themed rock-opera labor of love. Since then, the TSO catalog of songs finds its core in the Christmas spirit and folk lore.

That’s not to say TSO doesn’t branch off into other equally challenging and just as entertaining means of musical expression. Their winter tour, which has been in existence in some capacity since 1999, is a nice combination of Christmas meets metal with gothic frills and operatic vocal performances. 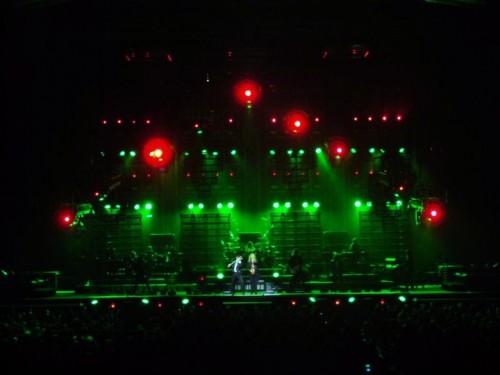 What makes TSO unique is that the group caters to musical protocol of days past. They utilize composers, professionally trained vocalists, musicians meticulous for an attention to detail and ability to recognize their individual voice as part of an orchestra as opposed to a four-piece garage band, and an overall artistry that puts other music collectives touring today to shame.

To say Chris Caffery is a virtuoso on the electric guitar would be an understatement. If asked to count how many times within the evening’s time frame that Caffery looked as though he was ready to break into an extremely disgusting yet ever so aurally delicious metal solo then I know I could not run an accurate tally. Often times, he kept it Christmas, but one of these days it would be an honor and privilege to see him break out of the holiday cage.

Violinist Roddy Chong is also a virtuoso in his own right. What Caffery does with a guitar, Chong does with a violin. There is an aura of complete mastery and confidence surrounding this pair of talented string players, but here’s the thing — the entire orchestra radiates that aura as well. Needless to say, that kind of stage energy is infinitely contagious.

Jeff Plate on drums does his own version of a Wipe Out solo complete with strobe lights monitoring his every move … minus the whole surfer dude thing … plus a little touch of progressive rock double bass pedal.

Jay Pierce is a convincing narrator of the show’s Christmas story. He has a certain boom behind his narrative that demonstrates complete confidence and portrays a sense of omnipotent understanding for the tale being told.

Moral of the TSO story is: these folks know what they’re doing and they do it quite well.

The success TSO continues to see today is due in part to a devout fan base who returns to the arena year after year. TSO did see some success in the realm of popular culture due to a viral video featuring 54,000 lights synchronized to their version of “Christmas Eve in Sarajevo” aka “Carol of the Bells,” but other than that it’s hit or miss with whether or not your closest friends may actually know who they are. Odds of those friends ever hearing of TSO before is also contingent upon whether or not they celebrate Christmas.

[Author’s Aside: I can, of course, only speak for myself and my fellow-concert go-er when I say neither of us had really heard of TSO until someone pointed out their existence to us. May it be known that the two of us just so happen to be Jewish.]

When Caffery polled the audience before the show to see how many people were in the audience for the first time, there was an overwhelming number of eager hands waving in the Verizon Center’s sea of people. That’s the great thing about TSO – you don’t have to know the words to every song to enjoy yourself.

Each year, TSO Winter Tour show’s have a three-part, no-intermission runtime. For music fans familiar with song form, this is an A B A’ (A prime) ternary form — they start with Christmas, transition into original/new material, and go full-circle back to the beginning with a reprise of Christmas ringing through the arena speakers like some seriously loud (but still enjoyable) sleigh bells.

To top it off, most of their non-Christmas songs don’t have any singable words – only singable melodies. It’s important to be honest though – once TSO starts playing it’s hard to remember the words to any songs whether they’re permanently embedded in your brain cells or not. Why? Because their stage show isn’t just a stage show, it’s an arena show that leaves your jaw dropped come the very last note of the night.

In-house fireworks, legitimate fireballs reminiscent of the when Dorothy and friends met the Wizard of Oz for the first time, lasers of all colors, smoke machines, drop-down make-shift catwalks and additional stages floating above the official stage floor, and enough watt power to leave the audience burned from heat exhaustion – that’s a TSO show. 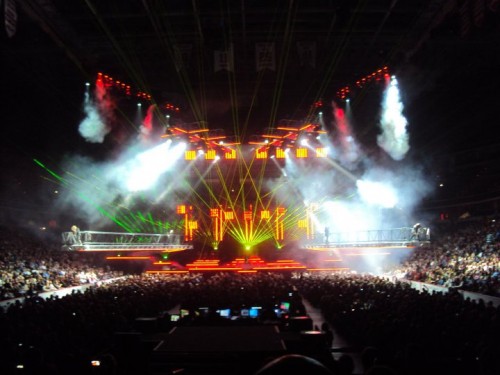 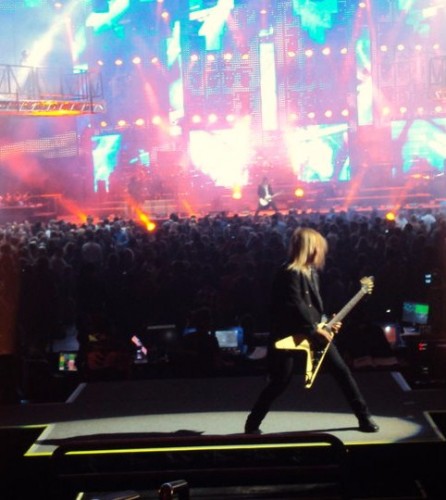 Looking back on the night, it would be beyond impossible to recall each song title from their 2.5+ hour set list. I see that as a good thing.

All I know is my fellow concert go-er and I walked out of the Verizon Center agreeing upon one thing – it’s a shame there’s no equivalent Jewish rock orchestra playing metal infused Hannukah music with over-the-top light shows. Maybe it’s time for my fellow tribe members to step up their game and get on that.

Either way, Trans-Siberian Orchestra is a must see for all-ages no matter if you’re an elderly couple in matching Christmas sweaters, a metal fan in a band t-shirt, or a nuclear family out for a nice night on the town. How do I know? Because that’s what I saw at the Verizon Center Thursday night. 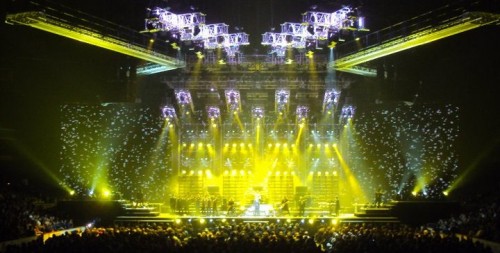 One thought on “We Love Music: Trans-Siberian Orchestra – Winter Tour 2010”