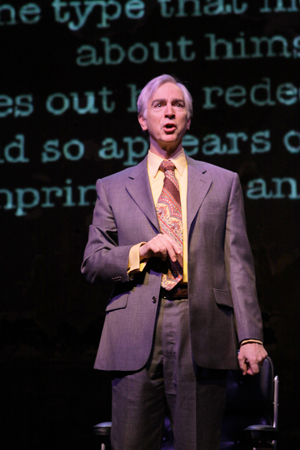 And where’s the relevance in that? (Tynan would’ve spanked me for asking that!)

Kenneth Tynan died relatively young at fifty-three after a battle with emphysema, compounded by a genetic condition that made the effect of smoking on his lungs even more deadly. Tutored at Oxford by C.S. Lewis (who makes a sympathetic cameo), a flamboyant dandy in his 1960’s prime, he had his most firey flourishing as theater critic for the Observer. There he championed the new wave of playwrights like John Osbourne against the rigid establishment, only to have his power fade once he took the carrot offered by Olivier of literary manager at the newly formed National Theatre.

I had a strong visceral reaction studying Tynan as a drama student. Reading his reviews assassinating Vivien Leigh’s acting while lauding her husband Olivier’s – the undercurrent of ugly misogyny contrasted with hero worship all delivered with complete brilliant wit – I wanted to punch him in the face. That reaction is what goads me to be a better critic to this day (and I think of it every time someone disagrees with my opinion!). So it strikes me as humorous that I realized after seeing this production, I far prefer young Tynan to old.

Philip Goodwin does a fine job of capturing Tynan’s wry subversity, his dark eyes glimmering as he recalls the higher points of his life and reveals his sexual escapades with glee. His impersonations of the many famous personalities – Marlene Dietrich, Ralph Richardson, John Gielgud – are spot on. Mostly however he is hamstrung by the construction of the piece, a long rambling monologue that only ever truly sings when it gives voice to others besides Tynan. The play comes more alive when he’s quoting Somerset Maugham, Evelyn Waugh or John Donne than when he’s despairing about his divided life between mistress and wife. It just seems so conventional, and I longed for more audacity. In the end all we’re left with is Tynan’s ennui, and it’s not enough to sustain any kind of dramatic interest. There’s a lost opportunity to explore the role of the critic in modern times, what it meant to be an artistic gadfly, and the need for a revolutionary to light a fire under complacency. Instead, the play takes the easy way out.

I wonder what Tynan would’ve thought of it.*

*The original stunningly perfect version of this review was lost to the internet ether due to a save malfunction. I’m convinced the old bastard himself was the ghost in the machine. Tynan once lost a manuscript to a thief in Spain. Too bad I’m not in fucking Spain.