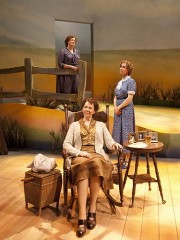 Much like everybody else around Washington, I am not locally born and raised. I was born in Lowell, Massachusetts and grew up in the neighboring town of Chelmsford. Before the city gained attention as the setting of The Fighter, it was known as a historic mill city  and one of the centers of the Industrial Revolution. Everything from canal tours to textile museum visits were regular rites of passage for the local school-aged children. While it was fun to ride in a boat through locks, learning about the finer points of looms and wooden dynamos were not the most entertaining of topics.

Local field trips was a staple of elementary school life, I remember a trip to a local Garrison House where we learned how to make soap and candles by hand while listening to costumed re-enactors talk about the trials and tribulations of life back then. That particular trip was pretty fun, I got to take home a bar of soap I made from lye and whatever else they put in soap back in the day. Nothing like hands-on activities to make history fun!

Ford’s Theatre’s production of The Carpetbagger’s Children is much like that, a look back in time at one family’s life during the post-Civil War, reconstruction era. The show is structured as a series of monologues delivered by three sisters of a Union soldier who moves to Texas after the war to start a cotton plantation. Each daughter moves the plot along, telling her side of a family’s struggle with values, death, and the idea of legacy. While the talented cast of Nancy Robinette, Kimberly Schraf and Holly Twyford deliver strong performances, the acting cannot help a show that feels like a third grade history diorama- not drama.

The lights go up on our three heroines sharing the stage en tableau, but spend the show with minimal to no interaction with each other. The intended look of “voices from the past” is conveyed but the audience can only take so much, “he said, she said” story-telling before checking their watches. The playwright Henry Foote is known his Oscar-winning screenplay of To Kill A Mockingbird and this is far from that. At one point the story focuses on the changing tide of manufacturing and middle-child/estate executor Cornelia has to make a tough decision to “change with the times” and let go of all of her tenant farmers and bring in machines to pick all the cotton.

It was at that point I had to check to make sure I wasn’t in Mr. Stavely’s high school history class. It felt like I had to write her line down in case I was being quizzed on it later.

The play makes attempts at compelling story: Grace Ann fights the family for her share of the land and is ostracized as a result, the youngest daughter Sissy has some lighter moments as a dim-witted debutante, and the premise of a Northern family living in a Southern Texas town offers some conflict. But the problem is that all these elements would be better told in a full length narrative, not a 90 minute lecture.

The Carpetbagger’s Children is certainly a look back at a time long-forgotten. However with a story that falls flat in a format that doesn’t really work, the show does little to make that time worth remembering.

One thought on “We Love Arts: The Carpetbagger’s Children”