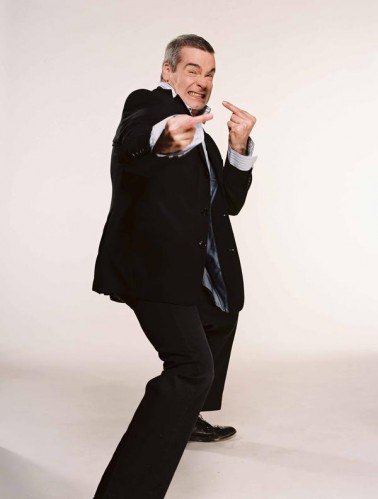 To drive home the fact that Rollins did in fact grow up in Washington DC and its suburbs, he was introduced by his childhood best friend; none other than Ian Mackaye. When I interviewed Rollins last week, he told me about the first time he met Ian Mackaye. It was pretty entertaining to hear MacKaye’s version of their early friendship. Apparently Rollins was a wrecking ball of a kid who waged war on a few of MacKaye’s friends for a few months (which in early teen years is an eternity). Mackaye said that for those few months, “to know Henry was to run.” Thankfully a common interest in skateboarding paved the way to peace between the two and before they knew it, they found themselves taking a cross-country bus trip together to find the real skate-boarders of California. MacKaye was quick to point out that he was only 15 and Rollins was just 16 years old at the time of this 6000 mile round-trip. He described it as two punk kids on an insane odyssey that forged their lifelong friendship.

MacKaye left the stage to thunderous applause from a loving hometown audience. The crowd love continued as Henry Rollins was quickly wheeled out onto the stage seated in a wheelchair with a helium birthday balloon tied to its arm. Rollins got up from his chair and immediately launched into his two hour monologue.

To try to recap everything Rollins talked about here would be a futile exercise. He was throwing out brief anecdotes, full blown stories, jokes, and observations at a mile a minute pace. His tales were head-spinning in their verbosity and side-splitting in their humor. Rather than attempt to recap his first 50 years, Rollins instead just seemed to pick up where he left off from the last time he did spoken word in the DC area early in 2010.

In the time since he last saw us, Henry Rollins went to China, South Africa, Tibet, Uganda, Southern Sudan, North Korea, and Costco! Of those last two I think he found Costco slightly more intimidating then the most oppressive regime on earth. Rollins style of storytelling was very descriptive (often with sound effects and impersonations) and at times took the looong way around from beginning to end. It was pretty impressive to hear him begin a story in one locale, with one thesis statement and then diverge on a thousand tangents that took us all over the world before bringing it back home to make his original point.

It was also impressive to hear Henry Rollins recite from memory the preamble to the new South African Constitution. While Rollins physique may be built like a brick shithouse, his brain apparently is designed like a steel trap! One of the over-arching themes of Rollins’ monologue was his unending optimism that good will win out over evil; that reason will overcome hysteria and hatred. He often contrasted tales of hope from the developing world with examples of ignorance in the United States (the supposed greatest nation on earth) and then challenged the audience to go back out into society to do good. To be inspired, to come up with progressive ideas, to help others, and to be general positive force in society. Rollins has a tough guy image but behind the scenes the man does a lot to inspire and help people.

Rollins closed his set by saying that he knows he’s not perfect and that he’s just doing the best he can to be a positive influence, but he would like to think that if Thomas Jefferson and Joe Strummer were around today, they would look at him and say “attaboy!” That is an aspiration that I can completely understand and relate to Henry. I don’t know if the ghosts of the former President and the former punk rock hero were in attendance on Sunday, but I am pretty sure they would have been as impressed as I was by the surprising deepness of your hilarious travel tales. Happy Birthday!