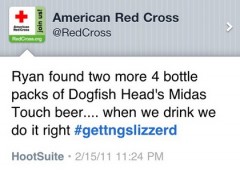 As a social media professional, I fully understand the risks of my job. It is a job that doesn’t end after 5 PM or when you walk out of the office. We remain connected at all times through Blackberry devices or iPhones. Yesterday morning my alarm went off and I rolled over to my bed stand for my iPod Touch. Like most mornings I check Twitter as my body slowly awakens. As I checked my timeline I noticed an odd tweet from my friend Gloria:

I know the risks of representing brands online, I too have accidentally made a “rogue tweet” on a client account. I laid in bed wondering what the offending tweet was. I soon found out upon arriving to work where news of the Red Cross’ rogue tweet went viral around the office.

I immediately reached out to Gloria get the full story. We were former colleagues at another PR firm before we both left to pursue careers in social media.

She and her fiancée Ryan returned home for some dinner. On the way back home they stopped by the grocery store and found a couple of 4-packs of one of their favorite beers, Dogfish Head’s Midas Touch.

“[I] thought I’d send a tweet out about how I was excited that we found some more Midas Touch in the store,” Gloria told me, “I used my iPhone because it was close at hand and wrote up a quick tweet before going to bed… And the rest is history.”

Indeed the rest is history, using the HootSuite app on her iPhone she sent out the tweet her work account and not her personal one. The app allows for management of multiple Twitter handles, I personally use it for managing multiple Twitter accounts as well. The tweet (shown above) was up for about an hour before her boss, Red Cross Social Media Director Wendy Harman, took it down and issued this witty apology:

However Gloria didn’t feel very jovial when she realized what happened. She described the her reaction as a tumultuous array of emotions including, “unadulterated horror, then embarrassment. Relief that my coworkers were supporting me. Then continued anxiety as I figured out what to tweet.”

The news quickly hit the blogs but unlike the negative backlash Kenneth Cole got from his own recent Twitter snafu, there was a massive show of support for Gloria and The Red Cross. The love came from all over including Dogfish Head Brewery and HootSuite, who were also following the saga. For the rest of the day the #gettingslizzard hashtag was used not in reference of Fly Like a G6, but for pledges to donate money or blood. As people learned about the incident, they had a good laugh and wanted to know how they could help the ongoing mission of The Red Cross. The incident also brought Dogfish Head Brewery and The Red Cross together, the two are now talking about future fundraisers and ways to promote awareness.

Amazing how a Twitter faux pas turned into a great opportunity for The Red Cross, their social media team handled the incident perfectly and were very understanding of the mistake. In a world where people get fired over Twitter snafus, I’m happy to report Gloria will be just fine. In fact Gloria got a joke gift from her colleagues over the whole thing.

“I’m very grateful to work in an organization with people who truly understand social media and embrace it, mistakes and all.”

Harman also notes that this little mis-tweet pales in comparison of what the organization deals with on a daily basis.

“We are an organization that deals with life-changing disasters and this wasn’t one of them,” Harman told Mashable, “It was just a little mistake.”

And of course Gloria learned a valuable Twitter lesson that we should all take note of.

“Double check tweets. Make it hard to even commit this mistake in the first place. And if all that fails, acknowledge the mistake,  see it in perspective, and be humble!”

8 thoughts on “EXCLUSIVE: The Red Cross’ Rogue Tweeter Talks To We Love DC”