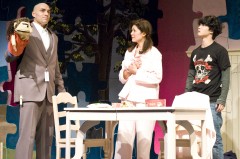 Playwright David Lindsay-Abaire enjoys his plays with a side order of surreality.

Whether it’s the science fiction undertones of Rabbit Hole or the mysterious conditions afflicting his protagonists like in Kimberly Akimbo, the perspective of Lindsay-Abiare’s works are distorted at best.

This holds true in 1st Stage’s production of Fuddy Meers, where the set takes on a jigsaw puzzle motif. That’s because Lindsay-Abaire never makes it easy for the audience, as they join the protagonist in figuring out what’s really happening. As the play goes along not only does the fog dissipate but you can appreciate what the playwright has done in revealing so much through characters that struggle to be heard clearly.

Claire (MiRan Powell) wakes up one morning in a strange bed, with no recollection of anything at all. We find out from her husband Richard (Kevin Hasser) and son Kenny (Jacob Yeh) that she suffers from strange form of amnesia where she wakes up each morning without any memory. Think 50 First Dates if Drew and Adam ended up in suburbia instead of Hawaii. To Richard and Kenny it’s just another day of retraining their wife/mother while going about their business. However a mysterious man with a limp and lisp (Matt Dewberry) kidnaps Claire and the show turns into a discovery of the past as both the audience and Claire try to piece together her past bit by bit.

Director Lee Mikeska-Garnder does a fantastic job of taking the audience for a ride, laughing the entire way through. The play could of easily taken a darker, Memento-like, turn but somehow Lindsay-Abaire manages to find comedy in a hostage situation. The key is in a cast of characters that possess  strange quirks. Claire has memory loss, Richard has a secret past, Claire’s kidnapper has a limp and a lisp, Claire’s mother Gertie (Jane Margulies Kalbfeld) lost her ability to form words correctly due to a stroke. The cast’s inability to communicate clearly should only complicate matters, but their ability to keep the plot moving says a lot about the strength of their performance.

If I told you this play was about a woman with memory loss that was kidnapped by gang including a limping man, a neurotic who can only talk through a puppet (Doug Mattingly), and an impostor cop (Nevie Brooks); you would think that this is a show that plays off the absurd- and it does. At the same time, the show finds moments of genuine humanity which makes this a smart show well worth the short trip to Tyson’s Corner.

One thought on “We Love Arts: Fuddy Meers”