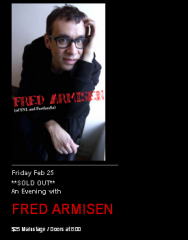 Unfortunately, when Armisen took the stage, the vast majority — if not the entirety — of his show was uninspired, lacked creativity and did not live up to his billing.   Armisen entered the stage with a display of his drumming prowess paired with a video of Karen Carpenter jamming, and while  no one can deny that Armisen is an awesome and talented drummer, this brief display of skill was as good as the show got. After his intro Armisen was followed on stage by a band and proceeded to play five songs that were neither creative, witty nor comical. While one or maybe two songs would have been acceptable, the audience was clearly confused and astounded by Armisen’s choice to spend that much time playing music that the audience was not into and didn’t find entertaining.

Once finished with his “set,” Armisen’s act never rose above lame impersonations of drummers, playing songs into the microphone from his iPad, and telling the audience how all he does to imitate Barrack Obama and Governor Patterson is squint his eyes. Another big problem with the show was the venue. The Mainstage at the Black Cat is not a good place to see a comedy act because unless you’re in the first ten rows of people, you cannot see the comedian, so you miss essential parts of the show.

The worst and probably most unprofessional part of Armisen’s show was when he turned on the projector and played 3 skits (one of which had already aired) from Portlandia. When finished, Armisen said “I probably shouldn’t have played 3 skits for you guys,” to which members of the audience responded “Yeh, you shouldn’t have!” To quote a fellow WLDC writer, “In a live performance the only time it’s acceptable to play video is during a costume change.” I couldn’t be more in agreement, especially when the video being shown is something 1) I’ve already seen and 2) I can watch from the comfort of my own home. I think it goes without saying that no one pays $25 bucks to see a live performance and expects to be shown a promo for the act’s TV show. This was just unacceptable.

Armisen finished up his act by taking Q&A from the audience, where his answers weren’t funny and he chose not to answer certain questions, e.g. who’s the craziest SNL host? I mean, seriously, Fred! Can you not come up with some material on your own? Does your paying audience have to do all the work? During this abysmal part of the show, someone scream out the question, “Can I have my $25 dollars back?” to which Armisen replied, “You want your money back? This isn’t easy. You think you could do this?” While the questioner didn’t take Armisen up on his offer, I’m positive a large portion of the audience was thinking, “Honestly, I definitely I could do better.”

But the point is not that Armisen didn’t try, I’m sure he did, it’s that Armisen and Black Cat promoted and sold the show falsely. Ticket buyers went into that show expecting, the rightly so, a brilliant, comedic performance and what we were given in return was so far off the mark it was embarrassing. In my opinion there was nothing entertaining, funny or original about the show.Was Armisen witty? No. Was his music good? No. Was he pleasant? Yeh. I’m sure he’s a very nice person. Is he a talented comedian? No. Should he be doing “solo” acts? Absolutely not.

20 thoughts on “An Evening with Fred Armisen @ The Black Cat”