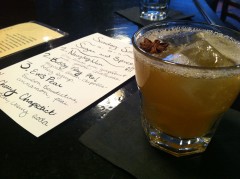 Sunday afternoon, I found myself fairly aimlessly going about town with someone when I happened to look at Twitter on my phone. A terrible habit, I know, but a habit nonetheless. I saw an update from The Passenger with a photo of their special cocktails for the day – and I instantly had a mission for us to accomplish. I texted one of my favorite friends, a known lover of Sunday excursions to the Passenger, to see if he wanted to join us. He replied that he was already there. I should have guessed.

It was the Bobby Flay Me which had caught my eye on the hand-written card. A mixture containing mezcal and chipotle-honey syrup would seem to fall plum within my bailiwick. I liked the bright, warm-weather drink well enough, though the spice element was not quite as pronounced as I would have imagined. Nonetheless, it did not quite click for me.

My next drink however, the Eve’s Pear, definitely did. Or, rather, the next drink ordered by the person with whom I came, which I promptly commandeered. It was fine – he was perfectly happy with the Naughty Nun I actually ordered and did not mind the switch. Being a bit of a crazy person, he hates anise – so as soon as the drink arrived with a star anise pod bobbing at the surface, he was suspicious of it. He went so far as to remove the pod and set it on a napkin before taking a sip. I scooped it up and plunked it back in when I took the glass and very much enjoyed the aroma.

The most distinctive feature of the Eve’s Pear is the silky, coating mouthfeel due to the pear. It is much thicker on the tongue than it looks which was a delightful surprise. The spice and herb notes from the cinnamon and Benedictine harmonize with the warmth from the bourbon.

It puts me in the minority, perhaps, but I am not one who really looks forward to the arrival of spring and the slow, sticky slide to summer which follows. Recently, the occasional warm days and the explosion of bright, frothy numbers in all the shops have got me a touch down. Autumn is really my favorite season and the Eve’s Pear is a perfect distillation of autumn, which makes me very happy, though still perfectly appropriate for these transitional days at hand.