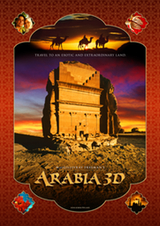 A look at the history and modern culture of Saudi Arabia, Arabia 3D has opened at the Smithsonian Natural History Museum. Filmed in stunning 3D IMAX, the film explores a nation which the filmmakers felt may be often misunderstood by Westerners in vivid detail. The first major international film to ever be shot entirely in Saudi Arabia, this production comes from the team that previously made such popular IMAX movies as To Fly – the first-ever IMAX which has been showing at the Smithsonian since its 1976 release – and Everest – the most-viewed IMAX to date.

Though the subject matter might initially seem less compellingly visual than an ascent up Mount Everest, the medium is put well to use. The camera soars over vast deserts and modern, glittering cities and deep below the Red Sea. Camels and coral appear convincingly dimensional just in front of the viewer’s eyes. Most stunning, though, is the footage of pilgrims at the Hajj. Taken from close within and from far, far above, the viewer gets a visceral sense of the intensity of the single largest annual gathering of humanity in the world.

Arabia is a continuation of a collaboration between the anthropology staff of the National Museum of Natural History and the National Museum of Saudi Arabia, which has previously resulted in a joint exhibition presented in English and Arabic in both countries. The film crew received academic and historical advising from popular British author and historian Robert Lacey who wrote the influential The Kingdom in 1979, which was recently recently followed-up by Inside the Kingdom. Dame Helen Mirren provides the film’s narration – a choice the film’s producers made very intentionally, feeling that, with many viewer’s conceptions of the treatment of women throughout the region, a very pleasant, English, female voice would be an appealing choice and set people more at ease.

The role of women in Saudi life is itself the focus of much of the last segment of the 45 minute film. The female activist and poet Nimah Nawwab is prominently featured, in what is a generally very positive portrayal. The film offers some light criticism of the culture’s treatment of women, but focuses instead on the considerable gains made within recent years in women’s autonomy, and, particularly access to higher education, with a nod at continued efforts toward gender equality.

It is this light, positive brush with which the Kingdom is painted throughout that most likely to leave some viewers uncomfortable with the film. Particularly in an over-long portion dedicated to the new Alfaisal University, the movie can take on an air more of tourist center promotional film (albeit one with extraordinarily high production values) rather than serious documentary. That said, as a piece primarily intended to be shown to school-children, it would seem to achieve its goals of counteracting negative stereotypes that the children might have been fed by today’s media or yesterday’s Eurocentric tellings of world history.

Besides, one may recall To Fly! being pretty soft on Big Hot Air Balloon, too.