The team was without Andray Blatche, who was ruled out with a sprained right shoulder which left the team short-handed and without an inside man. Josh Howard returned to the court last night but wasn’t very effective.The few sets that were run for Howard fell apart as the Clipper’s aggressive style of play got in their face.

“We just couldn’t stop them, we couldn’t hang in there,” Wizards center JaVale McGee said after the game. Coach Flip Saunders put it more bluntly: “We’re not as good as them right now.”

John Wall put up some decent numbers (25 pts, 8 asts, 7 rebs) but it was really the result of running the ball to the basket in an attempt to beat The Clippers at their own game of transition offense. Wall shot 9-23 in the field and 7-10 at the foul line. He displayed blazing speed but the Clippers did a good job in clogging the lanes and forcing the ball out of Wall’s hands.

“I did a bad job with taking some bad shots but also not finishing or finding my teammates,” Wall told me after the game.

The Wizards struggled to contain the Clippers,earning 13 personal fouls in the first quarter alone. The team ended the night with 27. The Blake Show was in force but not the way you would expect. His 26 points were done through jumpers and solid post play in the first half. He did have one Blake-eqsue dunk in the second quarter but there was no need to dunk all over the Wizards when he could push his way through  their defense.

In fact just about everybody else was dunking the ball, including three slams from JaVale McGee, who looked like he was getting a little compensation from his Slam Dunk contest defeat during last month’s All-Star weekend. However McGee says it was just business as usual.

“It wasn’t anything like that, I just dunk ball from an alley-oop just like I always do.”

The Wizards couldn’t really shut Griffin down, with Jianlian Yi just getting flat out embarrassed matched-up against him. He only played 7:34 minutes but racked up five fouls.

“I got a lot of tough calls, I haven’t seen that before,” Yi told me after the game.

The Clippers and the Wizards have so much in common yet are worlds apart. I think the night could be best described by a live interview with a season ticket holder during a time-out. He won the chance to watch the next Wizards game in the owners suite and was then asked what we was looking forward to the most. 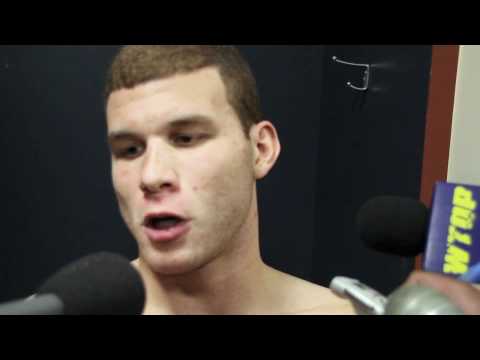 2 thoughts on “The Blake Show Topples The Wizards”