‘The ol’ Daily Grill in downtown DC’
courtesy of ‘dionhinchcliffe’

Keeping pace with the exploding trend of gourmet burgers, famed DC power lunch spot Daily Grill has jumped into the race with a selection of burgers good enough to put a smile on the face of even the most disgruntled K St. warrior.

Although they don’t have the variety of burgers that many of the specialty burger joints do, Daily Grill’s offerings are just as good. The burgers are made from an 80/20 Angus chuck that is double ground twice a day in the kitchen and hand-formed resulting in an incredibly juicy, tender burger. The balance between burger and bun was good, and there was enough cheese to provide flavor, but not steal the show from the meat.

Daily Grill features three burgers on their lunch and dinner menus: the classic (with or without cheese) and the first new burger, the Pepper Bacon Burger. The Pepper Bacon Burger is made with whole peppercorns in the patty, and, more importantly, solves a significant problem with earlier bacon burgers. Previously, burgers topped with bacon suffered a flaw – biting into one of the strips often results in the whole strip being pulled out of the burger, meaning the eater cannot get glorious bacon in every bite. By topping their burger with a chopped bacon hash, the bacon stays on top of the burger. 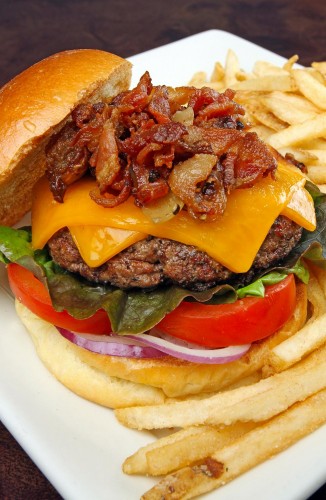 Daily Grill also added a second new burger with a little help from their patrons. Using Facebook and Twitter, Daily Grill held voting in 2010 to determine the new burger that would be on their menu. The result is the mushroom burger, topped with a blend of three types of mushrooms and a delicious, tangy pesto aioli. I was a huge fan of the aioli (garlic and pesto? whats not to like?), but I felt it did to a degree overpower the flavor of the mushrooms, which was pretty subtle (as mushrooms tend to be).

The surprise of the night, however, was found off to the side of the plate – the peanut slaw was really good and kind of even stole the show for me. The cabbage with crispy, since it wasn’t drowned in mayo, which went perfectly with the crunchy peanuts, and the vinegar-based sauce was a light, refreshing complement to the dense, meaty burgers. 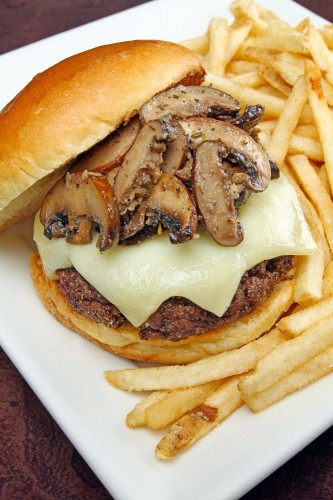