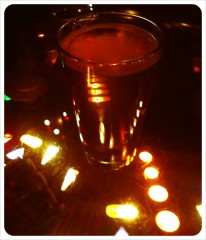 On Thursday, Tom and Tiff Bridge, editors of this fine publication, hosted a tacos-beers-margaritas fest at their lovely Brookland home. We ate and drank and Patrick asked me for advice on buying a tuxedo. A lovely coworker get-together.

After the party wrapped up and the Bridges were about ready to kick the last of us out, I drove fellow drinks team member William back to his house in Arlington. William is moving to California in a few weeks and has spent woefully little time at what I think is one of the best bars in the Washington metropolitan area, Galaxy Hut, in spite of living mere blocks away. We decided to do something about that.

I love Galaxy Hut. I do not even care that it is in Virginia – or maybe I think it is even better because it has stayed great while everything around it has sprung up yuppie. It exists to remind johnnys-come-lately that Arlington was punk rock once and even the snobbiest of “I never go to Virginia” snobs will make an exception for Galaxy Hut. Maybe it is like an embassy – when there, you are on diplomatic soil of whatever cool, urban neighborhood you fancy – albeit a neighborhood totally lacking in pretension.

Basically, if you have never been to Galaxy Hut, I want to take you there. If you have been there and do not like it, we probably are not going to be friends. They were playing Steve Reich when we walked in and it pretty much blew William’s mind.

Galaxy Hut is known for keeping a rapidly-rotating and rather impressive list of beers (which they announce via their Facebook should you wish to stay up to date) and particularly offering local products whenever possible. Recently, they have begun offering beers from the new brewery Port City Brewing.

Port City is based in Alexandria and has been rapidly gaining space on beer menus across the area. I had previously tried their Optimal Wit at ChurchKey and, having enjoyed that, was emboldened to order the Monumental IPA when I saw it scrawled on Galaxy Hut’s chalkboard.

It was an out of character selection. In general, I am not much of a fan of IPAs. Nonetheless, I ordered it to try something new from somewhere new – and was pleased with the results. Certainly, the bitterness is there, but the hops also have a floral, resiny quality which I do like. The flavors are well balanced and the beer is quaffable, though with a pleasantly substantial mouthfeel. The bright citrus notes offer a taste that reminds one that, as soon as this chilly drizzle passes out there, it will in fact be springtime very soon.

I would certainly enjoy drinking it again – perhaps outside, with some tacos.