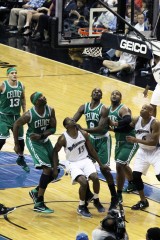 “This was a tough one, but this was the right one,” Boston coach Doc Rivers said after the game. He said he consulted with players and Boston General Manager Danny Ainge before making the decision to rest his fab four. Rivers looked at the game as a chance to give his bench players some minutes on the floor, scouting them out to see how his playoff roster and rotation will play out.

When  John Wall tied the game 92-92 with a minute left in overtime, the press joked that it would have been great to see Pierce get in the game for the final shot- but Rivers told us that wasn’t even an option. Boston’s loss combined with Miami’s win against Atlanta earlier that night locked the Celtics into the three seed and a match-up against the Knicks.

John Wall led the Wizards with 24 points but only had three assists. I wasn’t too impressed with Crawford’s play for most of the night but thanks to almost 46 minutes on the floor he ended the night with 17 points but went 8-19 on the floor. This was my first real chance to see him play after earning a starting spot and what I saw was bad shot selection. He would take shots on the run when nobody was really pressing him.

However in the end a win is a win and the Wizards showed more effort and closed out their season at the Verizon Center with a bang. However the lack of effort on Boston’s part puts an asterisk next to this victory. Tonight the Wizards play the Cavs to finish out the season. I’ll be more interested to see how the Wizards go up against a team that’s really trying.