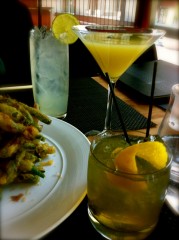 Horse races are sporting events I can get behind: Gambling, hats, and over in two minutes. Also, each of the American Triple Crown races features a traditional official cocktail.

At The Source by Wolfgang Puck, the bar team decided to honor the equestrian traditions by adding each of these three cocktails to their lounge menu for a limited time. However, as an Asian fusion restaurant, the classic mint julep (Kentucky Derby), black-eyed susan (Preakness) and Belmont breeze (Belmont) seemed a bit too domestic, so they decided to add pan-Asian flavors to their interpretation of each.

Upon reading this, I was curious – and maybe just a hint dubious. These are such iconic American drinks, the julep in particular. How would spruced-up Pacific Rim variants work out?

The answer is nicely. All three of the cocktails I was invited by The Source to sample were really fresh and tasty, blending the traditional drinks with modern twists while retaining the intention. The beverage team wanted to retain the essence of “boozy fruit punch you can drink all day,” as they were described to me, and succeed in doing so without making the drinks cloying or silly.

Mint juleps are something for which I have nearly as much affinity as crazy hats, so the Shiso Juelp was a big draw for me and I really enjoyed it. One of the best cocktails I have had in weeks, actually. Served in a rocks glass with ice cubes rather than crushed and with only one floating shiso leaf in the cup, it bears little visual resemblance to a traditional mint julep. Shiso is occasionally called “Japanese basil” due to a flavor that is vaguely reminiscent of that herb, but in the drink tastes somewhere between basil and mint. The aroma is subtle as is the sweetness. Not subtle about the drink, however, is how sprit-forward it is – the shiso-infused syrup being only a dainty decoration hung on a glass of Woodford Reserve bourbon. The bourbon is really allowed to come through in aroma and flavor to delicious result.

For those who want something a little less spirituous, the Green-Eyed Geisha – their spin on a black-eyed susan – is fruity but still sophisticated. Taking much of the flavor from yuzu juice, the pulpy, house-juiced citrus gives the drink a slightly more substantial mouthfeel, which is quite pleasant. Added to the juices are basil-infused vodka and 10 Cane rum. With a basil leaf floating on the top for garnish, the aroma is terrific and leads to a juicy, bright drink which, I was told, has been deemed the bar staff’s favorite.

Of the three, the lightest is the Bangkok Breeze. As the name suggests, it is based on a Thai-inspired flavor profile of ginger and lime. Tall, cold, and fizzy with ginger beer, the drink has a very summery quality. It also contains fresh lime, citrus vodka, and Domaine de Canton – the ginger liquor that pops up on any Asian-inspired cocktail list I come across. This drink is perfectly pleasant and would be lovely for sipping all race day long. Of the three, though, I was easily won by the Shiso Julep – making the Bangkok Breeze the Our Native to its Secretariat.