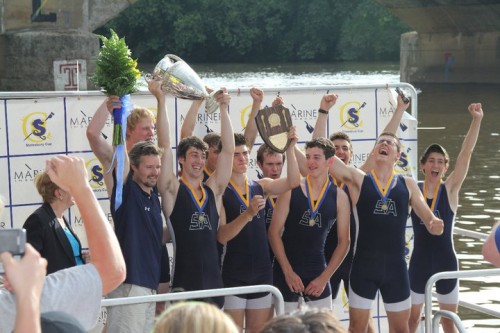 The St. Albans’ crew team’s men’s first varsity eight brought home the prestigious Edward T. Stotesbury Cup from their trip to Philadelphia over the weekend for the 2011 Stotesbury Cup Regatta, one of the largest and oldest high school crew events in the country.

The crew from the upper northwest school, located on the grounds of the National Cathedral, pulled off a stunning upset of two national powerhouse teams, St. Andrews (DE) and St. Joseph’s Prep (PA), cruising across the finish line in four minutes, six seconds, almost a full boat length ahead of the second place team. St. Albans also placed second in the men’s freshman and second eight races.

The win for the Bulldogs was the first championship for the school, and coach Ted Haley, at the race, which has taken place annually since 1927. The win also brings the Stotesbury Cup back to the DC area for the first time since 2007, when it was won by Thomas Jefferson (VA). As an alumnus of the St. Albans rowing program, it gives me great pleasure to see the team enjoying continued success.

Coach Haley was quoted by the Washington Post as saying:

“Its just a flood of relief,” he said. “We’ve been working real hard over the past four years. A lot of seconds, couple thirds, but we’d never had a gold. Now we have one and its amazing. . . . It’s the greatest St. Albans event I’ve ever been a part of.”