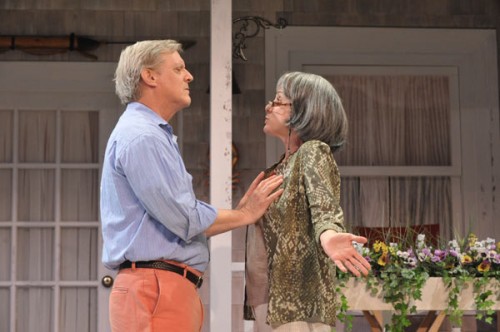 All my friends must think I have some sort of problem. Then again as a blogger they must be used to the fact I am always glued to my netbook.

Right now I am soaking up the rays in a lounge chair poolside at a lovely beach house on Hateras Island. It’s an annual trip that 20 of my friends and I take every year. It’s a nice week with friends, sun and surf hundreads of miles away from our normal lives.

The setting of Theater J’s The Moscows of Nantucket is much like the trip I am on right now. Set in a summer beach home on the New England get-away of Nantucket, set designer Robbie Hayes captures the picturesque and the kitsch one would find if they were vacationing on the Outer Banks or Nantucket.

Benjamin (James Flanagan) and Michael (Michael Glenn) Moscow look for a temporary escape from their current troubles by joining their parents at the family summer home in Nantucket. Their stay is a double-edged sword, offering an escape from the outside world but in return they find themselves in an isolated environment with a much more disrupting force: the family. The premise reads “dysfunctional family conflict” and the show certainly doesn’t shy away from it.

Both brothers come with inherent flaws, albeit with the constant lamenting and drinking “Benji” puts himself through- you can’t help but notice.

And that’s not a good thing.

Benji is a struggling writer who was recently dumped by his live-in girlfriend-turned lesbian. In comparison, Michael is a successful television producer of a hit network show. Michael’s personal relationships however is complicated much like any Hollywood regular. He recently dumped the mother of his son (and nice Jewish girl) for a southern belle on the cast of his show. You should sympathize for both brothers but they both come off either annoying and whiny (Benji) or a complete asshole (Michael).

Besides Benji’s yearning to be successful like his brother- both Moscows are often at odds with their parents Ellen (Susan Rome) and Richard (Bob Rogerson). Both parents play up the typical Jewish stereotypes: Richard is a retired banker who cares more about the stock market than spending time with his wife. Ellen is a guilt-inducing and stubborn. Of course there is going to be conflict when Michael arrives with a shiska on his arm (and a couple of surprises) but mostly everyone from Ellen, to the brothers are nothing but larger than life characters. Even Michael’s nanny (Amal Saade) appears a bit too naive when she becomes a possible love interest for Benji later on. Their interactions are awkward and a bit manufactured.

There is great potential for a really compelling piece, however the themes of sibling rivalry, finding your calling, and other Quarterlife-Crisis related angst is buried underneath a heavy serving of comedic smatlz. Given the context of the venue and target audience, the riffs on the Jewish stereotype should be expected, but after 15 minutes the routine becomes very cliche. One of the rare original bits in the show involves a well placed reference to Osama Bin Laden which makes me wonder if it was improvised or added in at the last minute.

Playwright Sam Forman missed the mark of what the show could of been with this kind of premise. The sibling rivalry between Michael and Benjamin doesn’t really go anywhere after an intermission-less 90 minutes. There are also hints of some Gen-Y topics, like boomeranging and career choices, that could of been explored more but aren’t as poor Benjamin plays the “woe is me” card all night long. As much as you want to care about the struggle and in-fighting between the Moscows, the audience doesn’t truly connect to them on any emotional level. The piece is front-loaded with comedy to start and ends suddenly as it tries to find the drama and conflict within.

There are a few saving graces, especially with the father Moscow, his comic timing and nuanced performance was one of the truly entertaining things on stage. Otherwise you can expect to chuckle here and there but the show gets very old very quick.

I think that Forman has a good idea with Moscows of Nantucket and I would love to see a retooling. My friend Rachel said it best when we left the theatre: the script wasn’t strong but could of been saved with strong acting- but that wasn’t there either.