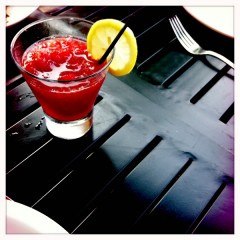 Wednesday started out pretty poorly for me. One of my favorite people celebrated his birthday on Tuesday night (his “actual” birthday, following the “pre-birthday” celebrations at U Hall on Saturday, mind you) and things got a bit saturated. I woke up the next morning feeling pretty sick. After some coffee and water, I got around to checking my email – only to be reminded that I was scheduled to meet up with some other press people to attend a cocktail tasting at Casa Nonna that evening.

I considered canceling, but let’s face facts: A drinks writer calling in hungover is not just unprofessional, it is downright amateurish. When six rolled around, I got myself together and headed over to Dupont Circle.

Casa Nonna is on Connecticut Avenue at N St, in the former California Pizza Kitchen space on the corner. A long, attractive patio stretches along the one side and the place seems absolutely perfect for the drinks-after-work set though, on this evening at least, the place is comfortably populated but definitely not crowded. As the summer evenings drag on, though, one expects that to change. To sweeten the deal: a trio of special “granitia cocktails” that bring together icy, fruity, and boozy to appealing result.

For each cocktail, the kitchen makes the granita base in advance. On their own, they are largely alcohol-free aside from one which has some limoncello in the mixture. The granita arrives at the table in one glass, with the rest of the cocktail components in a separate small pitcher. The liquid booze gets poured over the frozen mound and sometimes a bit of peel is flamed and set atop. Almost immediately, the mixture starts to settle into a cold, slushy consistency in the glass, something on the order of a slightly-melted frozen margarita – which I assure you is far more appealing and intentional than I make it sound.

Casa Nonna’s GM Adam Sanders said it was his goal that each drink “Balance the masculine and the feminine” – meaning that they be both sweet and spiritous. For the most part, I found they leaned toward the sweet, but the Cherry Blossom achieved an especially nice balance due to the fresh sour cherry granita base. I might normally skip over something that pink, with vodka and St-Germain as the main ingredients, but I was very pleasantly surprised. Mr. Sanders, who clearly takes a very active role in the restaurant’s cocktail program, prides himself on using fresh, natural flavors in all the drinks and making as many of the components in-house as possible, including infusing sprits and making his own limoncello.

All the drinks were tasty companions to the sophisticated takes on Italian bites that arrived at the table. If you are looking for a lovely spot to take a date or a few friends, have some drinks and graze for a while, while sitting outside – Casa Nonna would make for an excellent choice.