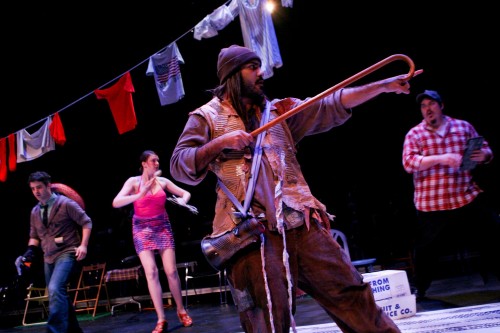 Charles Mee’s Bobrauschenbergamerica is based on the works of American artist Bob Rauschenberg. Even though the show can be enjoyed without knowing the late artist- I highly encourage you to at least Wikipedia the guy. It’ll help you get the most out of this hodgepodge of Americana.

The premise is simple: Rauschenberg was best known for creating “combine” art, where you create pieces not only with paint- but with newspapers, wood, and any ol’ household object. The props in the show feature notable pieces featured in Raucshenberg art including bathtubs, tires, and stuffed animals like goats and chickens. Rauchshenberg likes to throw stuff together and see what sticks- this show is a litteral interpretation of it. It’s a series of scenes, monologues, dances, and songs mashed-up together in such a way where it’s hard to discern where one scene starts and another begins.

It’s exactly what Bob would of done if he was a playwright instead of an artist.

The result if a crazy frenetic exposition where actors run across the space grabbing ladders, flags, and umbrellas.

Scenes include a woman known as “Bob’s Mom” narrating a slide show of Rauschenberg’s life- but the slides have been replaced with photos of his work; conversations about falling in and out of love; a man reciting chicken jokes while a man lies dying after being shot; and a woman rolling around in a giant Martini slip and slide.

The show is highly interactive, if find yourself in the front row expect to be handed props, asked to play whiffle ball, or become the receiver of a spare piece of corn or watermelon (free food!)

Bobrauschenbergamerica has highly entertaining points, like when Susan discusses the differences of how men and women love while eating an entire cake. Others are more abstract, like when a trash can is beaten into a metal pancake with a baseball bat. The show is full of Southern Americana and the feeling of celebrating life. While I cannot guarantee you will walk out understanding everything that occurs during the 103 minutes (no intermission), you will be entertained.

To borrow a line from the show:

“People will come to our museum and think: oh, that’s interesting or, oh, that’s stupid but they don’t really hold it against the show they just move on and look at something else and think oh that’s cool.”

And that’s ok, because we all see the world in different ways.

Tonight will be the last pay-what-you-can preview before the show formally opens, I encourage anyone that needs some last minute plans throw down a few bucks and take in this unique piece of performance art.

6 thoughts on “We Love Arts: BOBRAUSCHENBERGAMERICA”