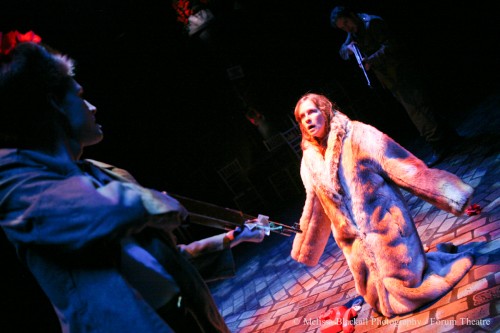 The show is a result of a trip playwright Caryl Churchill and a group of English Drama students made to Bucharest months after the Romanian revolution of 1989. Much like Tectonic Theater Project and The Laramie Project, Churchill and company spent their time gathering interviews and first hand accounts of the events that resulted in the collapse of Communist Romania and the execution of Ceaușescu. However history is more or less in the background of the show’s main storyline: the story of two families before, during, and after the revolt. The Vladus are a blue collar working family while the Antonescu family are reasonably well-off intellectuals. The two families are tied together through the relationship of Florina Vladu (Stephanie Rosewell) and Radu Antonescu (Alexander Strain). Radu is also friends with Florina’s brother Gabriel (Joe Brack). The play is driven through two marriages: the marriage of Florina’s sister Lucia (Dana Levanovsky) to an American and a later nuptial between Florina and Radu. The dynamics between the two families come to a head when deep seeded feelings towards one another aren’t changed despite new feelings of freedom and national pride.

In between the two wedding story lines are the moments I particularly enjoyed- both happening before and after the show’s intermission. The second act strays from the main plot line and presents a series of monologues of different points of view during the week of revolt in Bucharest. The ensemble comes together quite nicely to create a cacophony of stories that paints a picture of violence in the streets. Following the intermission the show takes yet another turn and presents a scene between a Vampire and a dog, a scene symbolic for the chaos and unrule surrounding the revolution. Ashley Ivey and Jim Jorgensen really dazzle and draws the audience in, almost making you stop questioning the purpose of the scene altogether.

The show certainly has it’s moments- problem is it takes too long to reach them.

The show develops very slowly, especially in the beginning act where dialogue is strategically, but sparsely used. The final act offers more to digest is at a tale end of a three hour show.

In the wake of the Arab Spring of 2011, Mad Forest finds new relevance with a new audience. In 1989 Romania the rallies weren’t started on Facebook or Twitter and media coverage wasn’t 24/7. All too many themes will sound oddly familiar in Mad Forest, most particularly a hospital scene where a paranoid, deranged patient is skeptical of the entire overthrow and execution of Ceaușescu. Questions like, "who fired the shot?" and "where are the bodies?" should sound all too familiar given recent events.

History buffs will certainly enjoy Mad Forest, wandering inside the show will bear fruit- but the path to find it requires patience.

One thought on “We Love Arts: Mad Forest”