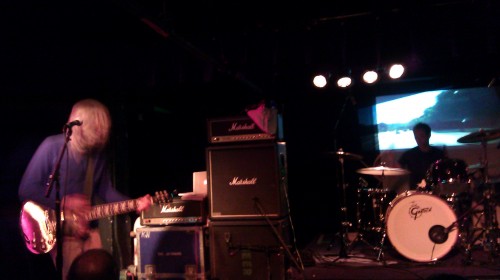 So I was a fan from a young age, and saw Dando in his prime. He is no longer in his prime. (This has nothing to do with age, by the way) I think it is partly because I was a fan since I was 12 or 13, and had seen him up close (I have a picture of 13 y/o me with Dando), that I was so blown away and shocked by the sad state he appears to be in now. But I’m trying to write a music review, so before I address the crisis that is Evan Dando, I will talk about the music.

If I had been blindfolded, or had been far enough back in the crowd to not see Evan Dando well, I might have enjoyed the evening of music. His touring bassist and drummer were clearly talented, and kept the music bouncing and lively while they were playing . Also, Dando’s fingers clearly remember how to play the guitar, he sailed through the songs without any major slip-ups. But from the beginning of “Rockin’ Stroll,” the first song on the album and the set, it was clear that his voice was not at its best. It sounded worn out, strained, like he was sick, and he couldn’t hit the high notes, or belt anything out particularly strongly. His voice did improve some as the set went on, though, I guess he warmed up. The band played through the short album Its A Shame About Ray, with high points on “My Drug Buddy” (the crowd sang along) and “Bit Part.” Unfortunately left out of the set was their better-than-the-original cover of Simon and Garfunkel’s “Mrs. Robinson,” which appeared as a bonus track on the album, and had a big part in shooting The Lemonheads to mainstream popularity in the early 90s. At this point the drummer and bassist exited the stage, leaving Dando alone to do a set of songs by himself. They rejoined him a bit later for some later hits including “Great Big No,” “Down About It,”  “Big Gay Heart,” and “Style” from the 1993 release Come on Feel the Lemonheads. The lyrics of “Style” seemed particularly appropriate for the evening “Don’t wanna get stoned, don’t wanna get stoned; but I don’t wanna not get stoned, I don’t wanna not get stoned.” The evening ended with Dando playing solo again, coming out for a weird, anti-climactic encore- he finished his last song and ducked off stage before people even had a chance to clap. The audience waited for him to come back onstage, but then the house lights went up. 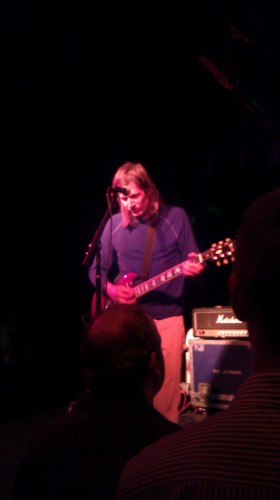 Now, here’s why even though I love The Lemonheads, I couldn’t enjoy myself. Evan Dando looked very unwell. He looked the kind of unwell that can only be explained by serious hardcore drug-addiction or some other kind of life-threatening illness. He seemed weak and fragile. I think the only way he is skating by without more people saying something about his state of being is his bone-structure (he takes a good picture and looks fine from a distance) and his ability to play his songs despite his physically deteriorated state. Maybe he is surrounding himself with people who won’t question him, or who are along for the ride. His bandmates were different from the last time I saw him (five years ago) and back then they were different from the original Lemonheads lineup. He is forty-four years old! He should not look this bad! He couldn’t keep his eyes open half the time, and when they were open they looked…unhealthy: glazed over, the whites not white enough. At one point he almost fell over, and it was not from rocking out. It was like when an old person loses their balance- so fragile, and you could see a little fear in his face. He looked vulnerable, and it was tragic. I can easily say this was the most depressing show I have been to in my memory. And I saw Elliott Smith perform in the year before his death. I say this with love-please Evan, get help!