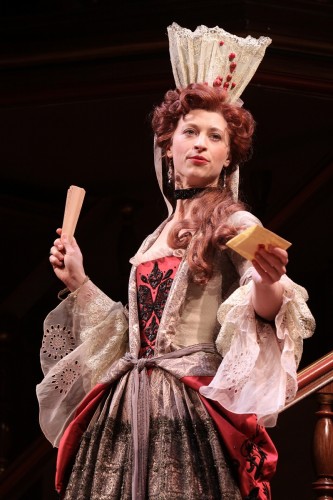 It’s a woman’s world out there. Now a days more women than men are attending college and these more educated females are putting off families and earning more money than men. As a late-20’s lost boy, I’m ok with saying that.  Folger Theatre’s production of The Gaming Table represents this new role of women well. In the show the women are empowered, smart, and clever while the males range from bumbling to sissy.

Amazing that the play the show was adapted from, The Basset Table, originally written in 18th century by playwright Susanna Centlivre. While additional material was added to modernize the piece, the play is still truly ahead of its time. Lady Reveller (Julie Jesneck) and her cousin Valeria (Emily Trask) are two different women who suffer from the same problem. Reveller would rather play cards at the Basset table she runs in her uncle’s (Michael Willis) house than put up with the affections of Lord Worthy (Marcus Kyd). Valeria isn’t much for cards, she is a woman of science. However her father would rather see her married to a Sea Captain (Michael Glenn) then dissecting frogs. Valeria doesn’t fancy Captain Hearty but does have an eye for his Ensign (Robbie Gay).

An 18th century play with a modern RomCom set-up. Doesn’t matter when the play was written though- you’ll be a laughing in the aisles all night.

The ladies in this show are sharp as tacks and punchlines are delivered quick and often. The audience will be chuckling all throughout the night, culminating to a dick joke that was clearly added in the adaption yet wins the night. Lady Rev and Valeria are supported by an equally charming group of ladies. Lady Lucy (Katie duBuys), Mrs. Sago (Tonya Beckman Ross), and the house maid Alpiew (Emily Townley) all fit in with the theme of fun-loving ladies who don’t let their men be the boss of them. Townley as Alpiew is a real scene stealer with her timely facial expressions that just adds the right amount of ham to this dish.

The men in this show are no Prince Charmings by any means. Lord Worthy (Marcus Kyd) pines away at his unrequited love for Lady Reveller in true diva fashion. Throw a pair of skinny jeans on him and he’d fit in as today’s emo hipster. His sidekick James (Michael Milligan) is after the hand of Lady Lucy, but his flamboyant suit and puffed up hair makes him look more like Liberace than Darcy.

However because the piece is a Restoration Comedy, the men in the end get their act together and outwit the ladies to get what they want. An ending that goes against most of the strong female themes of the show, but is corrected by an epilogue added at the end of the show.

Out of the all the pieces I’ve seen at Folger over the past year, The Gaming Table currently stands out as the most enjoyable to date. A classic piece that does not bore, a comedy that keeps things light, and an adaptation that does not try to change too much of a play that’s already solid in its original form.