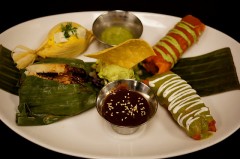 One of my best friends is from L.A., where winter apparently means tamale festivals, and she was feeling like a mid-winter masa party would be just the ticket one of these unusually California-warm weekends we have been having this year. She sent out this round of emails trying to get people to come over and steam some corn husks up with her – but it turns out all our friends are too intimidated by the somewhat lengthy and labor-intensive preparation and nobody was game.

How lucky it was, then, that just about a week later, La Sandia would send me an email about their own Tamal Festival, happening throughout the month of February. She and I happily accepted the invitation to cruise out to the Tysons Corner outpost of Richard Sandoval’s food empire – which also includes Masa 14, El Centro, Zengo, and about two dozen other spots spreading from Mexico to New York to Dubai – and sample the special festival offerings.

A food with a history traced back as far as 1200 BCE, tamales are found in one form or another across Latin America. La Sandia’s selections capture this diversity – and go way beyond the expected. The tamales are perfect for sharing (though you will want your own delicious margarita alongside) and we were brought a platter with one each of several of the styles. The tamal with queso fresco is the tamale one thinks of first: A corn husk, stuffed with slightly sweet, firmer masa. It is topped here with little bits of fresh white cheese and served with a tasty green sauce. The pork tamal was similar, though wrapped in a banana leaf instead of corn husk, the tender, delicate porksweet and rich with mole sauce and charro beans. This was my friend’s favorite of the night, though she was a vegan until recently and is hardly a regular pork-eater.

The most surprising of the tamales was the pescado variety. Served in a molcajete, this banana leaf bundle brought steamy, succulent mahi mahi sitting on a soft, creamier kind of masa, swirled with a spicy, chartreuse sauce of serrano chile and cilantro, and accompanied by plantains and yellow squash. This was my preferred tamale, so bright and fresh, and felt a bit lighter than some of the other corn cakes arrayed before us.

For dessert, there was a second version of the basic sweet corn tamal, this time topped by raisins and served with a bit of crema dulce, with caramel on the side. This was accompanied by a demitasse serving of a traditional coffee, café de hoya, which is heavily sugared and meant to bring out the sweet flavors of the masa. Personally, I prefer my coffee a bit less sweet, and found my spicy orange margarita worked paired well with our dessert. The real star of the final course, however, were clearly the delightful churros which arrived hot and perfectly fried, with a crispy exterior and that melty-cloud interior of which churro dreams are made. Dipped into a bit of a spiced chocolate, these little dough sticks were the perfect ending to a lovely meal,

Should you find yourself in the suburbs or make a special trip just to La Sandia, be sure to stop in this month to enjoy these delicious, festive dishes before they leave.