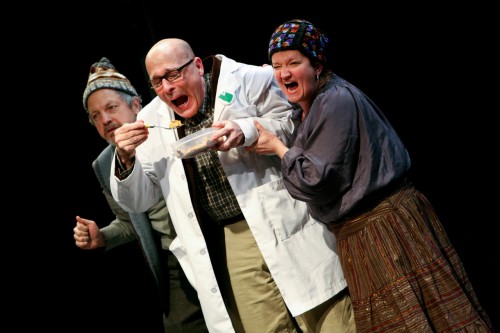 A part of Forum’s female voices festival, The Language Archive is anchored by talented ensemble cast led by Hébert as George, whose academic look reminded me of JK Simmons from those Farmers Insurance commercials. Hébert takes us inside George’s inner monologue with Zach Morris-like audience asides. His character is an absolute language nerd and Hébert demonstrates a true command of language whether it is English or Esperanto.

However the real show stealers of the production are the duo of Rambow and Christian. Not only are they electric as the bickering Resten and Alta, but infuse life into smaller roles as well. As Emma’s language instructor, Rambow has the opportunity to use foreign accents to drive up the laughs and does so with great amusement. Rambow even knows when to throw in a little physical comedy she sells a line about cooking and womanhood with an embrace of her bosoms.

Costume designer Debra Kim Sivigny gives the Resten and Alta the perfect third-world Mediterranean European look that would of been a perfect fit on an episode of Perfect Strangers.

Director Jessica Burgess brings the show to life with the proper balance between light and serious but the show suffers a bit of what I call “Return of the King” syndrome, where the show feels like it has too many “endings”. I feel like a good 20 minutes could be chopped from the script including an oddly placed epilogue at the end of the curtain call. The uneven flow muddles the overall message of the show.

However even as is, The Language Archive is an entertaining comedy that shows that in the world of languages it isn’t what’s spoken that’s important- but the connection between one another that isn’t.