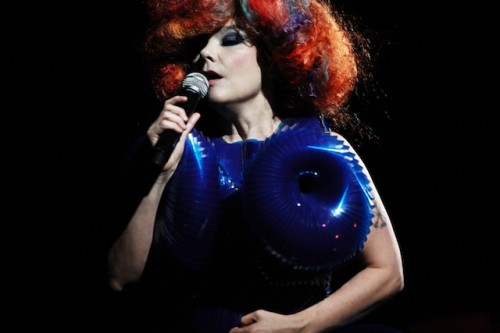 While We Love DC typically focuses on events in the Washington, DC metro area, we sometimes make exceptions for special events that are not coming to the area. Bjork‘s performance on Saturday night at the New York Hall of Science is one of those exceptions. The concert was part of her ten-show New York residency in February and March of this year.

It is rare to be at a concert and feel that you are having a once-in-a-lifetime experience; that you’re  truly a part of something monumental. I have been to hundreds of concerts in my lifetime. I have seen Bjork perform five times now. Saturday night’s performance was among the top concerts I’ve ever experienced, and it was more than just a concert- it was a multimedia art extravaganza. It was ground-breaking in many ways, and truly unforgettable. 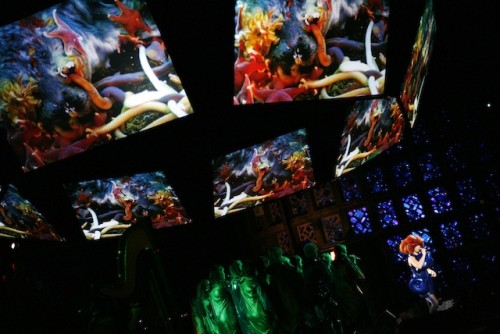 It is hard to accurately describe the scope of this concert and its significance without writing a book, but I will try to condense my thoughts for your reading pleasure. First- a scrap of background. Bjork’s latest album, Biophilia (her eighth studio album, released in 2011) was the driving force behind the concert series. The album itself was created as a mulimedia experience. Bjork collaborated with instrument-makers and scientists to create special instruments which she used for this album.The instruments included a “gravity harp” or “pendulum harp,” which used four 10-ft pendulums attached to cylyndrical harps, and a “Gameleste”- a hybrid, midi-controlled combination of a gamelan and a celeste, among others. She also recorded some of the album on Ipad, and before the album even came out she released a Biophilia interactive Ipad app. For the concert she brought along all of her unique and beautiful instruments, and incorporated video/visual elements on screens above the stage.

Let’s touch on the venue. The New York Hall of Science is a science museum.The concert itself was in the museum’s “Great Hall,” which, from the outside, looked like a tall tower made of honeycomb, undulating walls with chunks of blue and red glass throughout. From the inside it was basically a circular space, with a soaring ceiling. The stage was in the middle of this space, surrounded by various instrument stations- a pedestal for electronics, another for the percussion, and then on one side the magical instruments specially created by Bjork and her collaborators- the pendulum/gravity harp, a midi-controlled small pipe organ, and suspended high above the stage, in what looked like a human-sized birdcage, a double Tesla coil. Above the stage were video screens, in a circular formation mirroring the stage, that were visible from the front and the back, which played colorful and stunning visuals coordinated with each song throughout the night. There were seats as well as standing areas all around the stage, no more than seven rows of seats, so every one in the room was super close to the action. The plus side of this is obvious- I have never been so close to Bjork and it was so intimate. The down side is that she was not always facing your direction for every song- she changed direction for each song, to give each side of the audience their due attention. But there was so much to look at onstage that there was never a lack of visual stimulation in the night. 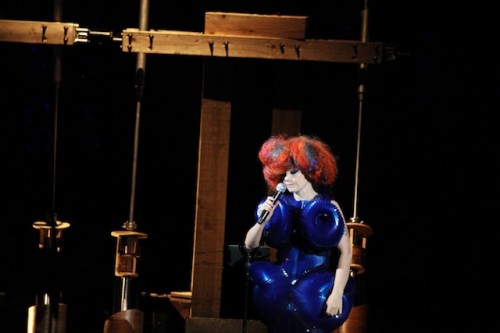 The set itself was heavy on material from Biophilia (she played every song from the album), as expected, but also drew from several other albums including  Medulla, Volta, Vespertine and even Post. Bjork started it off in a spectacularly dramatic fashion with the song “Thunderbolt,” off of Biophilia. As if being a mere stone’s throw away from Bjork in her big orange wig and blue vinyl sculpture-dress, and the 20-some-member chorus of girls, all dressed in copper fabric or blue sequins wasn’t dramatic enough, this song featured the night’s debut of the double-Tesla coil. It was lowered, in its aluminum cage, from the ceiling down to above stage level, and was a primal and amazing sight to behold. Now many people have seen a Tesla coil in action, and some have even used one on stage before (see Man or Astro-Man?), but I have never heard of or seen anyone use one as an instrument in a song before. It blew me away. Not only to hear the metallic, crunchy basslines that it produced, but to see the lightning it was creating in tandem- it was thrilling.

One of Bjork’s amazing strengths that shone on this night was harnessing both the terrestrial and celestial. She brings the very earthly elements of choral singing, handmade instruments (including the harp, played by wonderful, long-time Bjork collaborator Zeena Parkins), and seamlessy incorporates electronic elements, sonic and visual, even harnessing raw electricity with the Tesla coil. On top of that her appearance is that of a creature from another planet, something dreamed up in a sci-fi fantasy.

The songs from Biophilia were really given life in the concert setting. I had previously not fallen in love with the album, but experiencing it in this vibrant way, Bjork cavorting around the stage, working her siren magic, the chorus of girls dancing and singing, the instruments all right there, the energy, every moment was electrified- it made me love every song. Some musical highlights of the night included “Who Is It”, a jubilant track from her all-vocal album Medulla, the tender and beautiful “Sonnets/Unrealities XI” from the same album, and the bass-heavy, thumping “Pagan Poetry” off of Vespertine.

Bjork came back with the whole crew for an exciting encore that included the beloved “Possibly Maybe” from her second album Post. She also recruited the entire audience to sing “Happy Birthday” with her to a friend of hers in the audience. A crunched out hard-core “Nattura” followed, that included a reappearance of my favorite Tesla coil. The night was ended with an all-out dance party, everyone in the room and on-stage jumping and waving their hands in abandon to the battle call of Declare Independence. I pray that a live DVD of this concert experience is in the making.