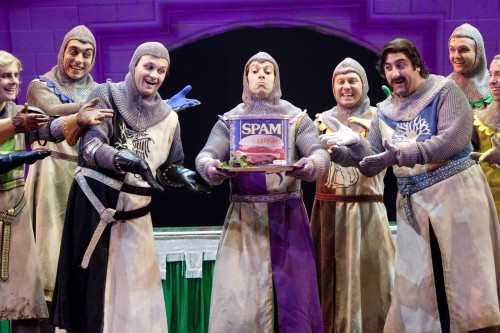 The exchange word for word was ripped straight out of the 1975 cult classic film, and the winner of the 2005 Tony Award for Best Musical makes no qualms about heavily borrowing the majority of the film for the Broadway “adaptation”. A lot of the audience were definitely Holy Grail fans with the way they welcomed familiar characters on stage such as the Knights who say Ni and The Killer Rabbit. For most, the exchange was as familiar as a Dane Cook joke in 2003. For me what I loved about the moment wasn’t the words that were said but the way they were delivered. I saw glimmers of the irrelevant, surreal style that made Monty Python a household name in comedy history. It wasn’t rude and crude, it wasn’t edgy, it was just plain silliness and it is that spirit that makes Spamalot an enjoyable experience.

Much of the film’s memorable moments can be found in the Eric Idle penned show. Some scenes are still as funny as they were done on film 37 years ago (the insulting French knights) and some don’t fully make the transition to the stage (the Black Knight). However where the show deviates from the Holy Grail film is where the show makes it’s best hits. The humor is squarely aimed at musical theatre, if you are a fan of musicals you will enjoy the subtle references to West Side Story, Company, and Fiddler on the Roof. The show’s self deprecating wit allows for numbers like, “The Song That Goes Like This” where things gets really meta:

“Once in every show, there comes a song like this. It starts off soft and low and ends up with a kiss.”

If you’ve ever seen a classic Disney animated feature you know what I’m talking about.

While the Rowan’s ensemble of merry men do a fine job dancing, prancing, and hamming;  Brittany Woodrow steals the show as The Lady of the Lake. She embraces the role with the right amount of diva attitude and is a welcome new element to the original Holy Grail plot. The ensemble can’t replace the original group of  John Cleese, Eric Idle, Terry Gillam nor the Broadway cast of Tim Curry, David Hyde Pierce, and Hank Azaria but they do a serviceable job in a show that honors the comedy that has influenced so many of today’s entertainers.

If you have seen Monty Python and the Holy Grail (and even if you haven’t),  you will immensely enjoy this show. This non-equity touring production is only in town for a week and will surely be a hot ticket. Is it worth the price of admission? If last night’s performance was any indicator then the answer is yes.