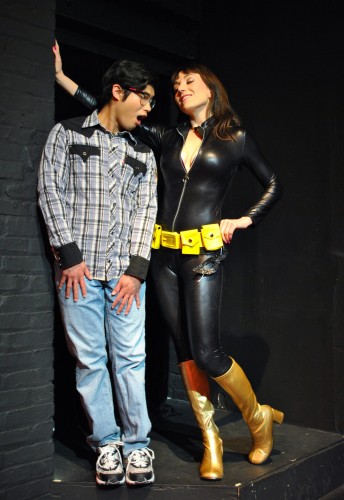 The production story of Broadway’s blockbuster musical “Spider-Man: Turn Off the Dark“, has more twists and turns than the actual musical. With a monster budget, superstar composers, and ambitious aerial stunts the show has been plagued with delays, technical mishaps, and harsh reviews. As a result the show has been the target of many late-night jokes and parodies. Leave it to Timothy Michael Drucker, creator of “Perez Hilton Saves The Universe“, to write his own Spider Man musical using a fraction of the budget of the Broadway production. Affectionately called “Spidemusical: A Second Chance For Awesome”, the show pokes fun at its blockbuster brother which boasts production costs upwards of a million dollars a week. After a New York run, the show arrives in D.C. where the daring folks at Landless Theatre Company take on the challenge of essentially making a sweded version of Turn Off the Dark.

Instead of high wire acrobatics, Landless employs an action figure tied to a stick. You won’t find fancy costumes in this show, instead actors don animal masks that look like they were plucked from the local Toys ‘R Us. The show is hilariously campy without going over the top. It is the perfect blend of humor and performance.

By now most of you should know the story: mild-mannered Peter Partker (names slightly altered to protect the copyrighted, played by Mickey DaGuiso) is bitten by a radioactive spider and gains Spidey superpowers. He has a major crush on Mary Joan (Melissa O’Brien) but she has her sights set on Colin (Matt Baughman), who looks like he just stepped out of Clarendon Ballroom, popped collar and all. Colin’s father Dr. Cosborne (Andrew Llyod Baughman) is a mad scientist who decides to try his crazy gene-splicing experiments on himself, transforming himself into Bloodlust, the show’s villain.

The show takes a few pot shots at the Broadway production. Who says you need to have actors flying overhead to have an aerial mishap? Spidermusical pays respect to the actors of Turn Off the Dark with their own technical difficulties. Quarters are tight in the DCAC blackbox, limiting options in the dance department but oddly feels right for a musical that was originally put on with zero budget.

The diminutive DaGuiso brings a fresh new look to “Partker”. In the realm of Dave Lizewski in “Kick-Ass“, DaGuiso looks like a real geek from the street. In the lead role he lets the gags speak for themselves, like developing the ability to sling web from a body part not usually known for web slinging. Melissa O’Brien is an absolute bombshell whether sporting a push-up bra in the opening scene or wrapped in spandex later on in the show.

Arielle Goodman who plays Partker’s Aunt steals the show however. She can belt out a tune with the best of them and somehow pulls off an entire song about clowns amongst a laughing audience without cracking up herself.

While the jury is still out on Broadway’s Turn Off the Dark, I’m ready to make a judgement for Landless’ Spidermusical. It is an entertaining romp whose low-budget cheese results in awesomeness that doesn’t need a second chance to make you laugh.