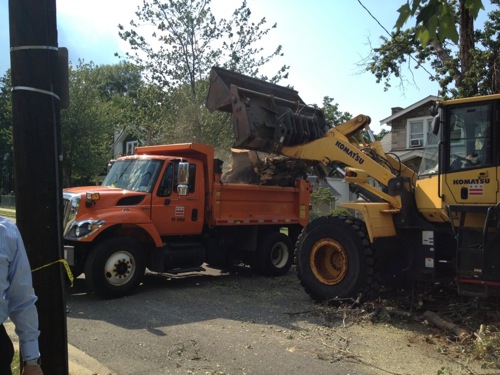 Author’s Note: This story was written at 6pm tonight. It wasn’t posted until 9:48pm because we still don’t have Internet back in Brookland yet.

I got home after a long hot day in the sun working with my clients to restore their operations, as a friend said that Mayor Gray, fresh off an overnight flight from China on Sunday, would be in my neck of the woods. I walked the two blocks to 18th & Monroe St NE where a large tree had been blown into power lines on Friday. The tree wasn’t the only one down in Brookland and Woodridge, and the storm wasn’t the first to take power for an extended period of time. The previous Friday a microburst struck the neighborhood and again sent mature trees into the elevated power lines that Pepco has refused time and time again to underground.

The Mayor was a welcome sight, as his black-on-black Lincoln Navigator was also accompanied by a pair of dump trucks that are part of the Bridge & Tunnel repair team and a pair of front end loaders. About ten minutes after the mayor met with some of the affected residents, the stump of the tree – freed from Pepco wires on Saturday night late – was hauled off.

Mayor Gray said, of the outages, that “this will continue to happen,” until Pepco can underground the lines that run through so many residential neighborhoods in the city. Pepco has resisted attempts to underground the lines citing expense, though the utility has never been able to clearly identify a cost that can be agreed upon. The city had budgeted $1-4M for the streetscape along 12th Street NE in Brookland from Rhode Island Avenue to Michigan Avenue, but then Regional VP for Pepco Vincent Orange Sr. suggested that the costs would be much higher, and the money for that undergrounding project was scuttled. The Mayor, and his Director of Communications Pedro Ribeiro were both fairly pessimistic about the chances to get Pepco to listen to the pleas of the area citizens, citing a lack of full autonomy for the council before the whims of Congress, and the heavily-connected resources that the utility wields in the public arena. Gray was also quick to say, “I’m not their best friend right now,” suggesting that the Mayor wouldn’t roll over.

Gray – and the City Council – would be wise to quickly tie any potential rate hike – Pepco is on the record asking the council for an increase in subscriber rates – to a comprehensive plan to underground the lines through major corridors over the next 5 years and increase the efforts made to prevent tree-based outages, and add a longterm plan to underground lines throughout the city.  The city has the opportunity to split the cost for this new conduit system with other providers of local wire-line services including Verizon, RCN and Comcast, all of whom are reeling from major outages throughout the city in the wake of the derecho storm on Friday night, all caused by trees and piggybacking along the same infrastructure.

The Mayor and the Council have a unique opportunity to forge a good coalition of local utilities, and create private sector jobs, while also fostering good will with the citizens throughout the city in an effort to reduce power outages.

Brookland and Woodridge have now had two three-day outages in twelve days – that’s two restocking trips to the local groceries for spoiled milk and meat. A commitment to making sure that this doesn’t happen again would go a long way with area residents to soothe irritated nerves over the loss of household budget control amid recurring storm losses.

7 thoughts on “Mayor Gray to Pepco: “This will keep happening””