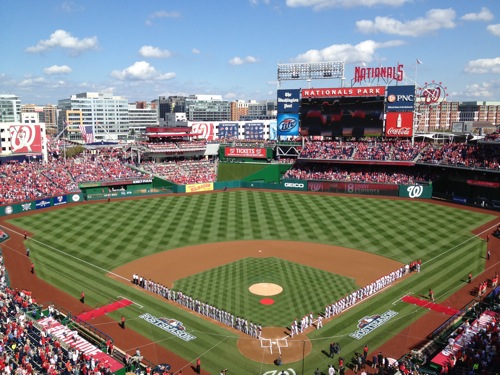 There was a fan I talked to on the concourse before the first ball was thrown today. He looked at me, grinning, and told me the story of how his wife would always turn to him and say on Opening Day, “Don’t fall in love, they’ll just break your heart.” He said now, he couldn’t say that any more, that he was looking forward to October plans at Nationals Park for years to come. This was a team that he had loved, and that hadn’t let him down.

As the players ran out the red carpet from the dugout to the field, it was hard not to agree with him. The crowd’s excitement and ferocity was like watching a lit fuse. The excitement was thick in the air, replacing the humidity of DC’s brilliant August evenings, but like so many games of previous Nationals teams, there was so little to cheer for.

The 1924 Washington Senators hold DC’s only World Series title. In a 12-inning victory over the Giants, the Senators put a cap on the best season that DC has in its baseball history books. The team, lead by Hall of Fame fireballer Walter Johnson and Hall of Fame slugger Goose Goslin was a triumph of wills. 88 years later, on the anniversary of that win, the Washington Nationals faced off with the St. Louis Cardinals in the first postseason game in 79 years. 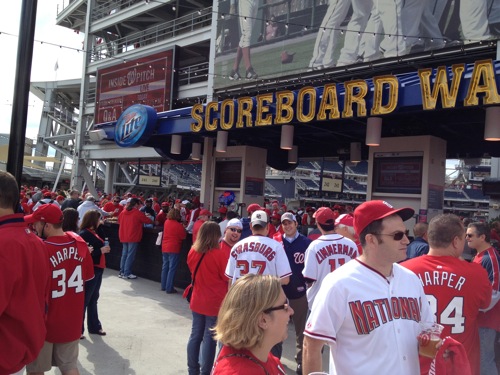 The pre-game ceremonies combined all of the best pomp and circumstance that DC has to offer, without going so far over the top that it could be seen from space. The military color guard carried a drum for the first time this season. Frank Robinson returned to DC to throw out the ceremonial first pitch (a strike, to Ian Desmond, who wears his number 20), and four F-16 fighter jets from the 113th Air National Guard squadron out of Andrews screamed overhead into the light cloud cover in the distance.

It was a hard day for the Nationals at the plate. They collected seven hits and three walks, but stranded all ten runners. They got to Carpenter, but not never enough to finish the job. Carpenter was out much of the season after surgery to treat his thoracic outlet syndrome, but has come back with four starts around 100 pitches, none as good as the game he pitched in Washington today.

Some of that frustration can be placed at the feet of struggling Nationals like Bryce Harper (1-15), Danny Espinosa (1-9), and Adam LaRoche (1-11), who appear to be channeling the 2009 Nationals instead of the 98-64 2012 Nationals that had a differential over over 100 runs.  “We’re not doing what we did all season,” said Davey Johnson after the game, speaking here of the bullpen’s surrender of four additional runs in the late innings, but he might well have been talking about a lack of patience at the plate, or the pressing for hits that they’ve been doing in the last two games. 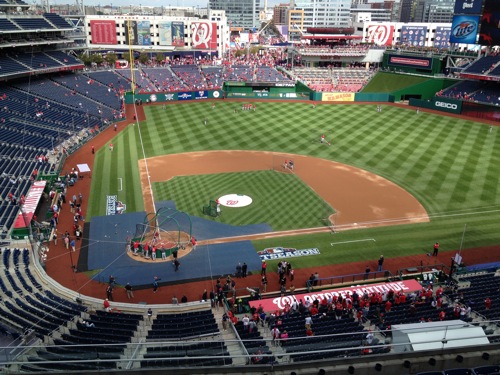 History is a harsh mistress.

The shadows of the past loom largest when we can select from their collection a highlight reel and say, “This is how it was,” ignoring the losses and the lowlights, and broadcasting forward a rose-tinted past that ignores the bad stuff and focuses on the good stuff. It’s easy to remember that 88 years ago, the Washington Senators won it all. That they triumphed in their darkest hour.

We don’t talk a whole lot about that darkest hour, when they played two straight must-win games on consecutive days in early October, having fallen back 3-2 to the New York Giants. They sent their #3 man to the hill, Tom Zachary, youngest on the regular staff, facing elimination and the end of the season. Zachary went just 3 innings in his last start before the World Series before coming out, and he’d not looked good. Yet, he went to that mound and threw a 1-run 9 inning game, scattering 7 hits.

As Davey Johnson said in the post game press conference today, “Shoot, I’ve had my back to worse walls than this… we’re not out of the this, not by a longshot.”

Detwiler takes the mound at 4:07pm tomorrow, with the season on his shoulders. Before the game today, he talked about his last few starts as lessons in what not to do. Here’s hoping he’s channeling Tom Zachary on the mound tomorrow. And let’s hope his teammates can find him some hits and runs to go with it. As Tom Boswell noted Monday, last year all of the Division Series winners were outscored by wide margins, losing blowouts, but winning the close battles.

May tomorrow be a battle.