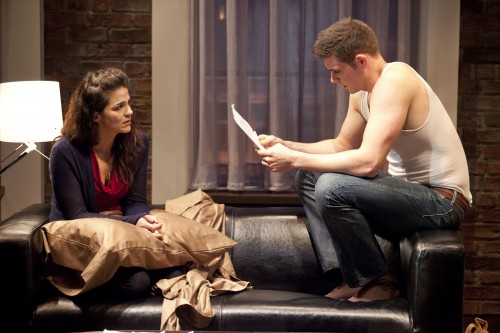 The play takes us back to mid-2000 New York into the apartment of Kelly (Rachel Zampelli), a therapist whose husband Craig (Thomas Keegan) is killed in a “training accident” while deployed in Iraq. Bad memories arise and dark secrets are revealed when Craig’s identical twin brother Peter (Keegan) unexpectedly shows up at her door. A year after Craig’s death, Kelly is ready to shut the book on the tragic event, while Peter is desperately seeking to find closure by examining the events leading up to Craig’s death.

The one-act play takes place entirely in the living room of Kelly’s apartment, with scenes switching between conversations with Peter and Kelly, to flashbacks to Craig’s last night before deployment. Keegan plays both brothers, and thanks to lightning fast quick-changes (undertoned by subtle sound cues designed by Matt Rowe and lighting changes designed by Colin K. Bills) the shifts from “present-day” to flashback are seamless. Keegan walks through an off-stage door as Peter and returns as Craig, complete with different outfits and vocal accents. In a demanding dual-role, Keegan steps up to the challenge and doesn’t miss a beat.

With that being said, it is important to be aware of the sudden scene changes and the dual-roles; the transitions are so subtle I was caught off-guard early into the play.

Nuance is certainly the theme in Shinn’s story. The majority of the play unfolds on the living room couch, where every move, word, and glance is under the audience’s microscope. Director Matthew Gardiner keeps the action focused and natural, letting the words and emotions do all the work. While many pieces about the Iraq war are set in vast deserts, this conflict is trapped within the confines of the small stage of Signature’s Ark Theatre.

Within this tiny powder keg are sparks that light fires as Kelly, Craig, and Peter reveal a past full of violence, sex, and abuse. The ride is short yet full of twists and turns as we discover hidden intentions and complex lies.

As talented as Shinn is in constructing such a moving drama with a small cast, setting, and time-frame, the piece feels unresolved. After a packed single act of conflict, it ends with a bit of a whimper without any clear message to walk away with.

Signature’s Dying City demonstrates that sometimes the most intense firefights of the war unfold not on the battlefield, but within the private lives of those affected.