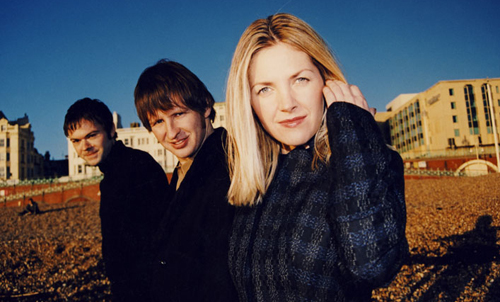 When former music journalists Bob Stanley and Pete Wiggs formed the band Saint Etienne in London around 1990, they sought to make music for films — to borrow a page from Brian Eno. If you’ve never sat and listened to the band’s first two albums — Foxbase Alpha and So Tough — from start to finish, you must do so immediately. They will transport you from driving Italian sports cars on a sunny afternoon to sipping wine at dusk in empty city plazas to dancing the night away in smart Europop dance clubs. The albums are the soundtracks to the fabulously interesting life experiences of your daydreams.

When recording Foxbase Alpha, Stanley and Wiggs intended to use different singers for every Saint Etienne song, adding to the varied texture of movie soundtracks. But to their delight and ours, the lovely Sarah Cracknell alone fulfilled their expectations so completely that she quickly became the permanent third member of the group.

Borrowing from Italo disco and other dance genres, the trio fused different musical strands into ambient house originally before moving into what critics called folky electronica in later albums. Cracknell’s lush voice and the sweet and synthy stylings of Stanley and Wiggs forged an alluring brand of dreampop that became the band’s signature sound.

Around 2000, Saint Etienne shifted into trip hop, becoming more followers than trailblazers with several interesting if occasionally dull albums. The band kept very busy for seven years after 2005 engaging in musical projects other than releasing studio albums. But they returned this year with Words and Music by Saint Etienne, a fantastically great album that not only sees them re-embrace their Italo disco roots but indeed fully unearth them in a shimmering spectacular of pop nostalgia that is so good your ears cannot help but melt with joy upon hearing it.

I.M.P. Productions is bringing this remarkable trio to the intimate U Street Music Hall for a concert on Thursday, Oct. 25. Local smooth house band Volta Bureau, featuring U Hall co-owner Will Eastman, serve as openers. Inconceivably, the show has not yet sold out. Do yourself a favor and buy a ticket now for this potentially once in a lifetime show.