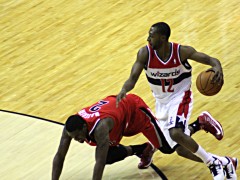 “Well we made it interesting,” Wizards coach Randy Wittman said after the game. Interesting would be an understatement. After leading the game over three quarters, the Wizards almost let tonight’s game slip through their fingers like the previous twelve.

The Wizards were slow out of the gate and fell behind 15-4 within the first four minutes of the game. Damian Lillard, sixth overall pick in this year’s draft continued his strong season start with seven points in the opening quarter. Entering the night he led all NBA rookies in scoring (19.1 ppg) and ended the night with 20 points.

Washington countered with Trevor Ariza, who started strong with eight points in the first quarter and a total 14 for the night. The Wizards rode Ariza’s hot hand which resulted in 36 minutes of play for the forward acquired from New Orleans during this past off-season.

Ending the first half with a 43-43 tie, the Wizards managed to pull ahead in the third quarter after an Emeka Okafor hook shot put the Wizards ahead 57-55. After three quarters the Wizards were up 68-59 and spirits were beginning to lift inside the Verizon Center. Fans and Press alike were beginning to wonder if tonight would be the night Washington finally finds that elusive win.

However a Trailblazers 15-0 run in the final minutes of the game eliminated the Wizard’s cushy lead. The Portland run was led by J.J. Hickson (15 points, 19 rebounds) and LaMarcus Aldridge (17 points) and was finally broken with a Jordan Crawford 3-pointer with 2:06 left to play. Crawford led the Wizards in scoring with 19 points off the bench. With 39.1 seconds left, two Emeka Okafor free throws put Washington ahead 84-82. A J.J. Hickson jumper with 2.8 seconds left failed to land and gave the Wizards the ball with .5 seconds left and all but ensured a victory for Washington.

But things never come easy for the Wizards, who simply needed to inbound the ball to end the game. Ariza’s inbound pass was stolen by Wes Matthews who called for a timeout as he landed to the floor with the ball. The referees reviewed the play and awarded Portland with .2 seconds which proved futile in the end.

While the Wizards were not all-out dominating in this first win, it still goes down in the books as a W and brings the Wizards to a 1-12 record.

Now all they need is a win on the road. 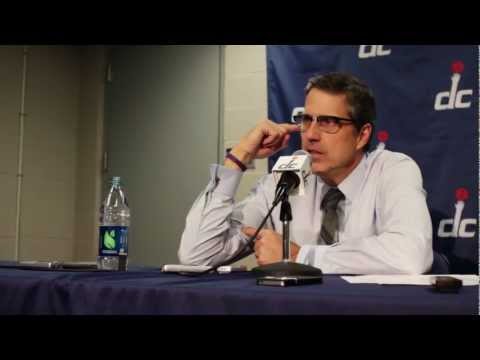