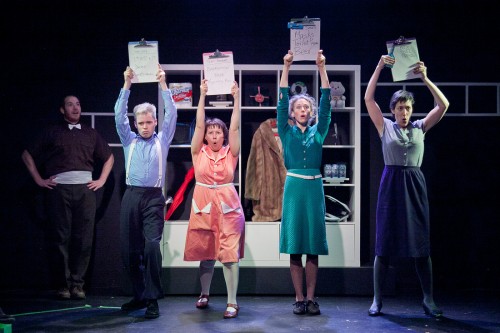 Fresh off the critically acclaimed Beertown, Dog and Pony has found their groove with another communal work that strives to entertain as well as provoke. At the helm of the show is Colin K. Bills, who steps into the directors chair after establishing himself as one of DC’s premier lighting designers. Bills admitted in a recent blog post that he wanted to put on a work like this for some time. Quoting himself back in 2010 Bills says, “I think this is a good time to put some old school absurdism back on our stages, with full use of contemporary theatre practices.” Loosely based on Eugene Ionesco’s Killing Game, Dog and Pony’s interpretation raises the body count literally by pulling in the audience to play along with the actors.

In the cast is an ensemble that includes Genna Davidson, Sean Paul Ellis, Jessica Lefkow, J. Argyl Plath, Jon Reynolds, and Yasmin Tuazon who play the roles of the townspeople and help facilitate the audience participation. Borrowing an element from Ionesco’s version of the show, Rebecca Sheir plays a mysterious woman in black, whose presence is never fully acknowledged yet always haunts the show. Surely an embodiment of death if you ever asked for one.

While the on stage action is fast paced and culminates into a highly enjoyable game show that equates disease survival to a game of Let’s Make a Deal, this piece isn’t entirely as clean as last year’s Beertown. There were some extended beats I felt were a bit overdrawn for effect and the abrupt departure from the light and fun-filled atmosphere at the end will surely leave some audience members uncomfortable (physically depending on where you end up on stage.) The show hits as a night of themed theatre games but misses in weaving Ionesco’s themes throughout the piece.

However Dog and Pony has yet another enjoyable gem where the amount of fun you will have is entirely up to the you and the audience. What makes this show a lot of fun is the empowerment to steer the show, something I may or may not have enjoyed when I planted a little Gangnam Style during the press performance I attended. Dog and Pony DC once again offers a unique theatre experience that is worth the price of admission. Just remember to check your inhibitions at the door and you will certainly have a night that will be to die for.