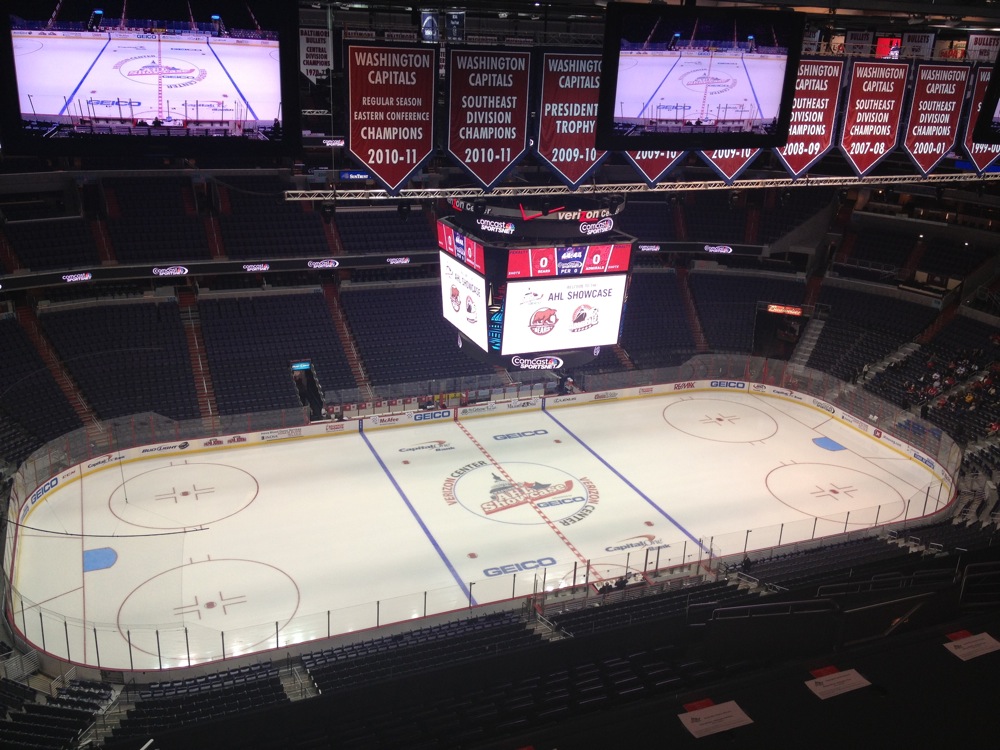 The AHL Showcase brought hockey back to Washington on Thursday, though not the Caps game that everyone had hoped for. As the NHL and NHLPA continue their drawn out labor negotiations that have curtailed the Capitals season through at least December 15th, the Caps’ AHL affiliate from Hershey took the ice to face the Norfolk Admirals (Anaheim Ducks).

Though the Showcase was planned well ahead of the dispute, everyone had hoped that this would be a pleasant interruption in the usual routine, not the only hockey that DC has gotten since May 9th, 2012.

Coming to the ice for the Hershey Bears were several familiar faces for Caps fans, though, lead by goalie Braden Holtby. Dmitry Orlov also received a loud ovation from the crowd, though he’d leave the game in the 2nd with an upper body injury and will be day to day while he recovers.

The Admirals struck almost immediately after puck drop, rifling in a shot to the glove side of Braden Holtby, and it would take the Bears almost five minutes to find their stride again, and another eight thereafter to even the score, which Evan Barlow did on a beautiful one-timer in front of the net.

While the game progressed at Verizon Center, a game of a different sort was being played out in front of cameras in New York, as negotiations surrounding the labor stoppage in the NHL proceeded. As the game began, it appeared dark for the season, but in the first period, the players came out with some strong statements on compromise, as they made what appeared to be reasonable agreements with the ownership – including some givebacks that indicated there was compromise to be had – and the mood improved. Could this be the end of it? By the first intermission, though, the NHL had broken up with the NHLPA via voicemail, like on a bad teenager-focused sitcom.

The second period was dominated by the press conference from NHL Commissioner Gary Bettman and Vice Commissioner Bill Daly, and their take on the latest round of negotiations (hint: it wasn’t good. It wasn’t going to be good after they demurred via voicemail.) As the period began, the beneficiary of the NHL/NHLPA spat was clearly AHL Commissioner David Andrews. He spoke with reporters as the puck dropped to talk about the AHL Showcase here in Washington, as well as the upcoming AHL Outdoor Classic due in January, and mentioned the AHL was having a “banner year” when it came to attention, thanks to the lack of other options. Andrews was quick to note that they wouldn’t be here at all without the NHL, though, and they’re benefitting this season from 125 NHL players in the AHL currently.

As the third period began, the Bears made a push for the lead, and put a beautiful one-timer together with Steve Oleksy feeding Evan Barlow in front of the net. As the NHL/NHLPA drama faded into the background, it was hockey once again at Verizon Center drawing the attention. Braden Holtby made some saves, the Bears would press and press the Admirals defense, and the final result put the Bears at 10-11-1, still in 4th in the East.

Something, though, didn’t feel right the whole night. The Verizon Center crowd was fairly tepid most of the evening, and devolved into chants of “Fire Bettman” during the third period. A holiday greetings video staring Slapshot was uncharacteristically booed during the third period. The animosity from the crowd, despite clearly enjoying the game itself, turned into the story.

For the record, I’m at the AHL Showcase tonight, but going the very low-key route. Something just doesn’t feel right.


No one felt good about it, Goat. Not one person.

Bring back the NHL.

2 thoughts on “Hockey in DC: The AHL Showcase”