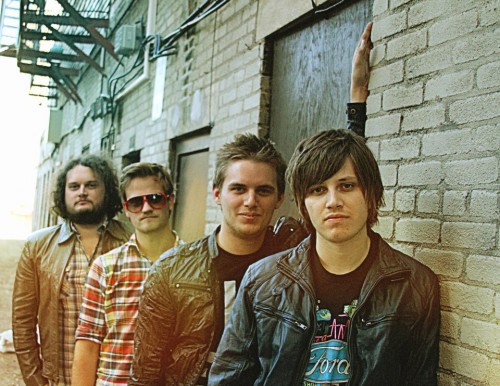 Alexia: Was there one song/album/artist that first made you fall in love with rock music?

AP: The Beatles. I wore out their Rock n Roll music compilation album when I was little. That’s what did it.

Tony Perry (guitar): For me it was a mix of different stuff. Beatles, Stones, Rage Against The Machine, Beastie Boys. I was all over the place.

Alexia: What was it like to play Lollapalooza? Was that the biggest festival you’ve played? Any favorite moments from that?

AP: Lolla was awesome. It was one of the best gigs we’ve ever done. We had a few thousand people at our stage even though it was early in the day and it seemed like a lot of people were actually there to check us out. It felt like a headlining show. The show had lots of energy and the crowd was awesome. People cheered when we walked on the stage, which was a new thing for us since we’re used to opening other shows and having to win folks over. But at festivals I think people are there to try and see new bands and the way Lolla sets up their site, people can check out stuff in advance and get pumped for some new bands. All in all it was a great time, so hopefully we’ll get to do it again. As far as “biggest” festival, I think the Download Festival in the UK was bigger in terms of people (we did it in summer 2010 i think). That was also a blast. But Lolla was special because it was the biggest US festival we’ve done.

LJ: (Adrians answer sums it up) But I’d like to add that my favorite part of playing Lolla was to see the poster I designed the week before being held up by fans in the audience. That was an added bonus for me.

Alexia: If you could collaborate with any one band or artist, who would it be?

TP: anybody from Black Rebel Motorcycle Club or Jack White

Alexia: What are you listening to lately that you love?

AP: Pretty heavy into The Ronettes, The Crystals, Darlene Love and all the other 60s Phil Spector stuff right now. Very cool.

TP: Alt-J is my new favorite band along with Little Dragon, Hot Chip, and Feist.

Alexia: What’s on the horizon for TAB the Band?

AP: We’ll be putting out a single and new video early 2013 with a new album to follow. We’ll be touring after that around the US and we’ll try and get back over to the UK too.

If you were lucky enough to get a ticket to Friday night’s sold out Jane’s Addiction show at 930 Club, be sure to get there early to catch TAB the Band opening the show!