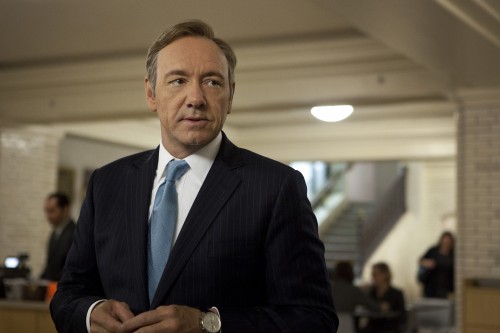 I know a lot of my friends agree that House of Cards is a great show about Washington but it’s more than because they got the look of DC right, or the Politics of DC right, or even the way we lock staffers in a room til a bill is written right.

I’ve said before if you want to win over DC on a show about DC, just use properly labeled DC cabs and do not put Metro stations where they shouldn’t be. The show appeals to our inner DC wonk with a picturesque view of the city in the show’s Intro that features DC images beyond the monuments.

The show is a gripping fight for power that works in the halls of British Parliament (like the original BBC version), on Capital Hill, or within a small-town PTA  group. This is more than a show that gets DC right, it’s a show that is a solid thriller with strong characters. It covers politics accurately but doesn’t get too deep into the weeds for it to be unaccessible.

Kevin Spacey as Democratic whip Francis Underwood is a Machiavellian mastermind in his quest for ultimate power and has the wits, charm, and cunning to play all those around him like a fiddle. However Frank’s wife Claire might be the more sinister of the two, and Robin Wright steals most of their scenes together. There’s something very satisfying in watching a power couple working towards similar goals. All too often a drama like this involves cloak and dagger movements between husband and wife, it’s refreshing to see a show that doesn’t necessarily rely on that sort of plot device .

Even characters such as Russo (Corey Stoll) and Doug Stamper (Michael Kelly) are captivating to watch. Stoll commands a powerful performance as a Philadelphia Congressman who battles with addiction. Stamper as Underwood’s right-hand man deals with Frank’s dirty work with a no-nonsense style and makes for a worthy sidekick.

With the freedom to write shows at any length and without extraneous plot devices to catch-up the viewer, Willimon weaves a story that is straight forward and is pretty much devoid of filler. Fincher gives the show a solid feel and look at the helm of the first two episodes. The torch is carried by other notable directors including James Foley and Joel Schumacher who add their own little marks but mostly maintain Fincher’s envisioned style.

I’m not a fan of Zoe Barnes, a young up and coming reporter played by Kate Mara. She’s irritating and whiny and I’m not a fan of where she goes romantically towards the end of the season. She’s absolutely what one reporter calls her early in the show: a Twitter Twat. She starts the series as a reporter for a paper similar to the Washington Post but eventually ends up with a blog called Slugline where they apparently don’t believe in desks or chairs.

Hey Hollywood, working for a news website is pretty much like any other office. Quit trying to set it apart with all these over-the-top nouveau schemes.

At the center of House of Cards are two anti-heroes in Frank and Claire that the audience roots for all too often. Willimon and Fincher show us a dark world behind the closed doors of government that we welcome like an extra slice of chocolate  cake that you just can’t refuse.

Now I’m eagerly waiting for the rest of you to finish watching so I can have somebody to talk about the show with.

2 thoughts on “House of Cards: Today’s Best Show About DC”