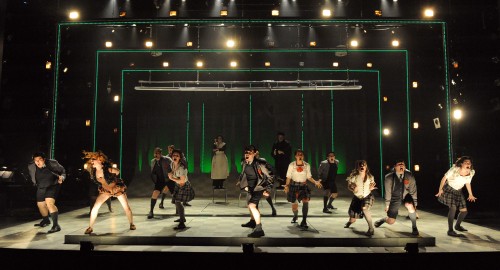 Cosson, who you may remember at the helm of Woolly Mammoth’s Mr. Burns, assembles a stellar cast that starts with the powerful harmonies of females Louis, Mary Lee Adams, Dayna Marie Quincy, Gracie Jones, and Maggie Donnelly in “Mama”; continues with Parker Drown’s indie-like sound in the role of Moritz; and ends with Kacergis’ all encompassing vocal range. There doesn’t seem to be a note he can’t hit. The red-headed Donnelly as Ilse is a delight and as I tweeted after the show, a bombshell that will sneak up on you with her musical talents.

The rest of the ensemble includes some familiar names including Ali Hoxie who starred as Wendla in Keegan Theatre’s production of the show last summer. She’s listed as Wendla’s understudy in this production and clearly loves the show to pieces to do it twice in one year. I don’t blame her, there’s so much to love about this show. The story is simple yet moving. Each musical number embodies the emotional angst and frustrated energy that we can all recall from our teenage years. It’s a musical yet has the feels more like a rock show than a stage show.

Costumer designer Sarah Beers and set designer Adrian Jones paint the 19th century tale with modern colors. The industrial set of wire scaffolding is layered and compliments the show’s rock and roll feel with the help of lighting from Robert Wierzel. Costumes and sets are more contemporary driving home the point a similar story could have happen today under more conservative conditions. What kind of conditions?  Perhaps an answer sent with the choice to dress characters up as Altar boys during “Touch Me.”

I found Sam Pinkleton’s choreography a bit hit and miss. While I thought he made great images and lines with the actors, I thought the reoccurring theme of hand gestures reminiscent of a game or rock, paper, scissors to be a bit awkward.

There’s only a handful of musicals I can think of that stand out for its originality and raw, honest story telling. Spring Awakening is in this group of shows and folks at Olney do a fine job in producing it. Consider Spring Awakening a great reason to trek up I-270 for a show.

One thought on “We Love Arts: Spring Awakening”