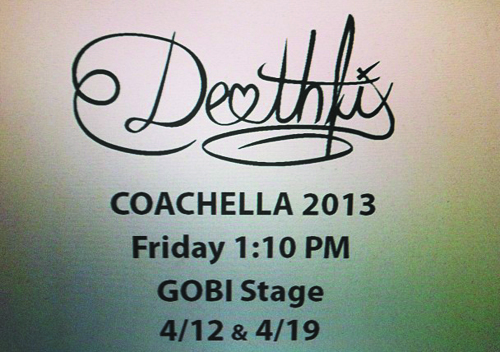 Three DC-based bands on Ian MacKaye’s Dischord Records travel to Indio, Calif., for the next two weekends to play at one of the largest and most exciting music festivals — the Coachella Valley Music and Arts Festival.

Deathfix, a relatively new band consisting of veteran musicians Brendan Canty, former drummer of Fugazi, and producer Rich Morel, recently put out their first album on Dischord. I caught up with the talented and gracious Mr. Canty to ask him about playing Coachella and what’s next for his band.

Mickey: Coachella! That’s exciting, isn’t it? How did that come about?

They had us down there, and some of the Coachella people were at that festival. We started talking to them. They saw us play a couple of times, and then they asked us to come out and play the festival. So it was a pretty organic process. It didn’t involve any bribery. (chuckles)

There are a lot of Dischord fans and a lot of love in the Goldenvoice camp for Fugazi and Dischord. They used to do all of our shows out there. Goldenvoice did all of our southern California stuff and our stuff in Alaska, if you believe it. We’ve had a really long relationship with them.

[Editor: Goldenvoice is the California production company that puts on the Coachella festival every year.]

MM: The timing couldn’t be better for Deathfix! You just put out your first album in February.

BC: Exactly. We just got back from touring on it for a couple of dates as well. We’re just starting the process of being a band and touring. So far, it’s a total pleasure!

MM: Well, your album has received some positive reviews! They say it’s something a little different, which I think is often what people are looking for. Might you describe yourself what Deathfix is? What is your sound?

BC: In the whole process of getting the people to know the band, the dialog has centered on what it is and what it isn’t. The process itself isn’t all that different than being in Fugazi or any other band I’ve been in. You get together with some guys and you write some songs. You try to make the best record you can.

Reading some of the reviews, you would think there was an honest, intentional direction. And we were intentionally not trying to be like Fugazi or intentionally trying to be like T. Rex. But really those conversations come out of talking to people who haven’t heard the record. It’s like trying to describe where the influences for certain songs came from, but it doesn’t necessarily describe the whole picture or the songs themselves.

By illuminating where some of the deep-seated influences, I risk pigeonholing the record or the band into being something that it’s not, and make it sound like it’s some pop freakout.

But I don’t think it’s as poppy as all that. When we play it live, it’s actually a big loud thing. There’s a lot of the same sort of improvising that Fugazi did. When you have a band, it takes time to get to that place where you can really be spontaneous on stage more and more. Touring helps us with that a lot. We are really getting into that realm. And our writing is getting more democratic. I’m really looking forward to making another record.

It’s a product of where I come from and where Rich comes from. We come from two different places. The result is meeting somewhere in the middle of those two places.

MM: Completely understood! Say, where can people in DC catch up with Deathfix after Coachella?

BC: We are going to be playing outside the 9:30 Club for Sound Bites, a benefit concert featuring a lot of good bands and food from some really great chefs, on May 19. It’s a benefit for D.C. Central Kitchen. So it’s a great opportunity to listen to some good music and eat some good food!

For more information on Deathfix and the band’s tour dates, visit Dischord Records.

One thought on “Q&A with Brendan Canty of Deathfix (Catch Them at Coachella!)”