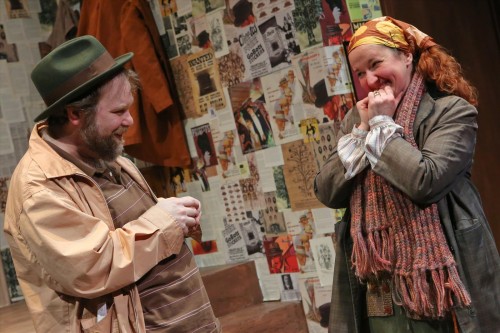 The setting of Lauren Yee’s A Man, His Wife, and His Hat is unknown. Looking at the actual set of The Hub Theatre production, one might guess that it takes place in the 80s based upon the telephone and television. The dialects and accents hint that it takes place somewhere in old Europe where hat-making is still a feasible profession. The overall feel of the show reminds me of the fictional land of Mypos from Perfect Strangers. It wouldn’t have surprised me if Balki Bartokomous burst through the door to the tunes of Jesse Frederick’s Nothing’s Gonna Stop Me Now.

The foreign land, the somewhat distant past, and the physics that are meta in both scientific and poetic terms come together to form a fairy-tale world. In Yee’s universe golems live underneath your floorboards, memories are kept in glass jars, and all-knowing walls possess the secrets of the world on printed pages.

Yee’s story, with direction from Shirley Serotsky, is a whimsical one — with a message of love that’s heartwarming yet not too sugar-coated.

The recipe for a happy life for retired hatmaker Hetchman (Sasha Olinick) is simple: a can of peanuts, his hat, and The History Channel. His post profession years are an endless cycle of sitting on the recliner and vegging out. Simple pleasures for a seemingly simple man.

Hetchman’s world is rocked however when he wakes up one day to find his hat and his wife (Kerri Rambow) missing. Without his hat he can no longer hear the soothing “hat music” that infuses his life. Without his wife there’s nobody to do chores around the house and keep his peanut stash full. It doesn’t take much to guess who does the work in this long standing marriage.

He falls into a despair that requires his effervescent neighbor/best friend Meckel (Maboud Ebrahimzadeh) and a golem made out of trash (Chris Stinson) to help remedy.

Also in the mix is a young woman called Voice (Kristen Garaffo) in an intertwined sub-plot years in the future. Voice searches for answers when her upcoming marriage is threatened by the sudden development that her fiancee Gabe (Daniel Corey) starts to physically float away. Linking the two tales together is a talking wall (Helen Pafumi) that acts as a narrator and confident between both the characters in the audience (talking about breaking the fourth wall!).

The premise sounds weird but everything is game within the confines of a fairy tale. Yee’s set-up enables us to suspend our belief while Sertosky’s perfect casting gives us an ensemble that entertains throughout the 90 minute one-act show.

Yee’s overarching message of love, love, love is strong but loses its way at the end, a victim of her fanciful world that takes up too much room to the point the ultimate moral feels like an afterthought. Regardless, A Man is the sort of story that’s a perfect antidote for today’s “Happily Ever After” fairy tales. The visuals on stage may be imaginative but hold true as analogies for life.

One thought on “We Love Arts: A Man, His Wife, and His Hat”