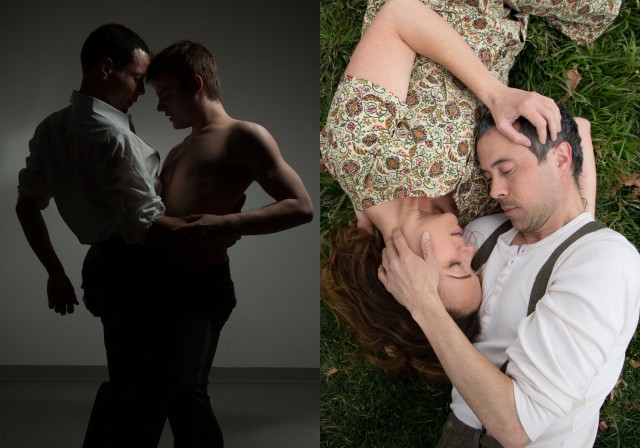 When Elizabeth and Tom leap at each other to open Skin Tight at The Studio 2ndStage, they’re warning us: love and intensity go hand in hand, and this lyrical, passionate show is about love – real love – so it will be intense.

Skin Tight is one of two one-acts showing as part of Studio 2ndStage’s sexy, imaginative, and thoroughly engaging Pas de Deux: Plays from New Zealand and Canada. The second piece, 2-2 Tango, was one of the first major successes at The Studio 2ndStage back in 1992.

In Skin Tight by Gary Henderson, Tom and Elizabeth relive their passionate marriage through an emotional duet. Poetic at times, violent at others, the piece reflects a love story from the inside out with intimacy and depth. Director Johanna Gruenhut’s staging is the kind that stays in your memory for a long time to pester and delight.

As Elizabeth, Emily Townley is so natural on stage you believe she’s actually living this frenzied frolic. You’re trespassing in, on tiptoes. She is brutal and biting – literally and figuratively – and so charming we fall in love with her despite the pain she causes, just like her husband does.

Jens Rasmussen matches Townley perfectly as Tom. When he looks at his wife affectionately, we do, too; and when he wants to kill her, we do, too. His physicality when angry sets the viewer in a rage; and when gentle he calms the room.

Watching these two together felt familiar, like looking in on a memory of oneself. Their battles and reconciliation are so true to the experience of love, told with such lyricism and honesty, that at times it felt too painful to watch and at other times glorious. Through Tom and Elizabeth we live out a full love story in an hour or less – an exhausting and cathartic feat.

In 2-2 Tango by Daniel MacIvor – the second one-act of the evening – we meet another couple: James and Jim. Their love story is just as intense, though perhaps not quite as painful as Skin Tight. And while, like Skin Tight, it depicts the brutal nature of intimacy, lust, and loss, it’s also quite funny.

It seems inappropriate to describe Alex Mills, who plays James, separately from Jon Hudson Odom, who plays Jim. Even though they attempt “indenpen-dance” throughout, wanting desperately to express themselves without another person even as they both wish for something deeper, the actors work together entirely as a team, and one’s movement would lose its meaning without the other’s. Both men woo us with perfectly timed expressions and impeccable control of movement.

The shows succeed in part due to the brilliant choreography by Nancy Brannon. The two couples’ stories unfold through chaotic and calculated action that says as much about character as any line in either show. Scenic designer JD Madsen sets the stage for both stories with just enough connection to the literal to keep these poetic pieces grounded. The lighting by Jedidiah Roe is especially well-done and complements the most tragic and, later, most comedic moments of the night.

2-2 Tango is fierce, funny, and heartfelt. Together with Skin Tight, Pas de Deux: Plays from New Zealand and Canada reminds us what love is and what it isn’t, why so many couples don’t make it, and how to appreciate the pain and pleasure of spending life with another person. Take that other person in your life, and see it.