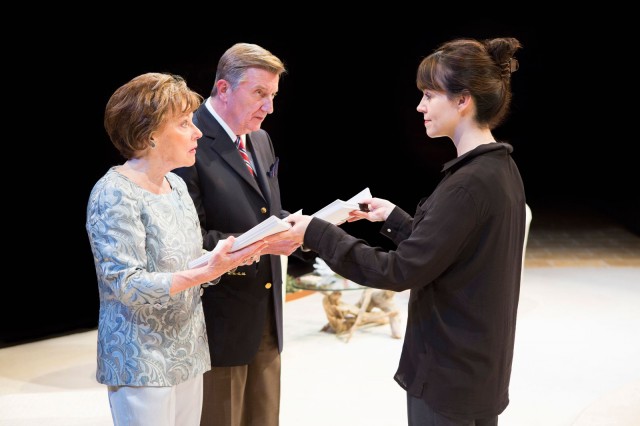 Jon Robin Baitz’s Other Desert Cities, Arena Stage’s season-ending production, focuses on the fictional Wyeth family. A family with an all too familiar Hollywood story.

Patriarch Lyman (Larry Bryggman) is a golden-era actor who followed in the footsteps of his friend Ronald Reagan and went into politics. Under the Reagan administration Lyman was appointed U.S. Ambassador and later became GOP chair. Matriarch Polly (Helen Carey) earned her fame writing TV shows and books with her sister Silda (Martha Hackett). Their kids Brooke (Emily Donahoe) and Trip (Scott Drummond) did pretty well too: Brooke is an acclaimed author and Trip is a successful reality television producer. A successful Hollywood couple with successful Hollywood children.

But also like celebrity families, they had their share of tragedies alongside their accomplishments. Silda was an alcoholic and Brooke was deeply depressed. The eldest Wyeth child Henry committed suicide after running away from his family and was implicated in a bombing that killed a war veteran. The Wyeth family story sounds all too familiar in American celebrity culture: great success intertwined with scandal and tragedy.

Baitz’s gripping drama takes us beyond the tabloid type and paparazzi photos and shows us conflict more real and raw than anything you’d see on those reality shows on E! or VH1.

The story picks up on Christmas Eve 2004 in the Wyeth’s Palm Springs home. No time is spared in building up the tensions, the Wyeth family hardly have their shoes off before the barbs come out.

Brooke reveals that her along awaited new book is actually a tell-all about the life and death of her brother Henry. Brooke hopes to honor her brother but doesn’t hold back when it comes to her views on how Polly and Lyman handled (or mishandled) the situation. With a New Yorker story already in the works, Brooke’s new book is poised to bring their family nightmare from long ago back into the spotlight. The composed yet stern Polly is tested by her daughter’s actions and quickly lines are drawn in the sand.

Self expression versus Family preservation are at pitted against each other and Director Kyle Donnelly makes it hard for the audience to easily side with anyone. Instead we are pushed and pulled by the two parties, feeling trapped in the middle like Trip, who tries his best to play the middle. Lyman also tries to keep his hat out of the circle but ultimately crumbles in the process.

The performances are strong all-around, Bryggman displays an old Hollywood charm while Carey delivers sharp quips with the grace and beauty of a rose whose thorns you do not want to touch. Donahoe and Drummond remind us of what it must be like being the children of famous parents.

Other Desert Cities is a firefight that will have you ducking for cover yet peeking around the corner so you don’t miss a moment of action on stage. A hairpin turn later in the show will turn what notions you may have on its head so make sure you buckle your seatbelt and hold on tight: this show is one hell of a ride.