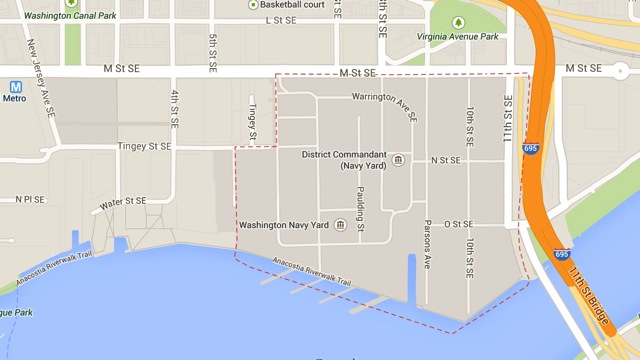 Thirteen lie dead in a Navy Yard office building, victims of a mass shooting, purportedly committed by Aaron Alexis, a 34-year old avionics engineer. The Southeast DC community, and the city as a whole, are shocked by the blatant act of violence committed against uniformed personnel and civilian personnel working side by side at the Navy Sea Systems Command on the base of the Navy Yard.

At times, the information situation was very fluid today, as the media and others attempted to make sense of the situation. Death and casualty tolls varied throughout the day, but have peaked at twelve dead, with a “dozen or more” additionally injured.  Three wounded in the attack are being cared for at Medstar Washington Hospital Center, including one Metropolitan Police officer who was shot in his lower extremities. One victim was shot in the head, but the bullet did not penetrate her skull. All three are stable and expected to survive.

There is still an ongoing investigation at the Navy Yard, as the MPD, Military Police and FBI search the Navy Yard from stem to stern, looking for a person of interest described as a black male, around 5’ 10”, between 40 and 50 years with a medium complexion and graying sideburns. If you have seen this individual, please call the FBI at 1-800-CALL-FBI.  An additional person was identified as a person of interest or subject, but he was cleared.

The FBI would also like anyone with knowledge of Aaron Alexis in the last few days to please get in touch.

The area around the Navy Yard is still largely blocked off from traffic, with M Street SE blocked from South Capitol Street to the 11th Street SE.

Tonight’s Nationals game was postponed, with the team releasing a statement, “All of us here in the Nationals organization were deeply saddened to learn of the tragic events that occurred this morning only a few blocks from Nationals Park.”

Public transportation running through the area is also affected, with buses unable to transit the area, which will cause delays across a number of bus lines affecting the area.

As you leave today, please re-route around the Navy Yard unless you have to be down there, as the area is still an active crime scene and investigation is still in progress.

It’s been a hard day for the District. Our Federal and Military workforce are a special group of people, a group with dedication to service of country and community, and attacks against them are particularly enraging. Our thoughts are with all those affected by today’s tragedy.