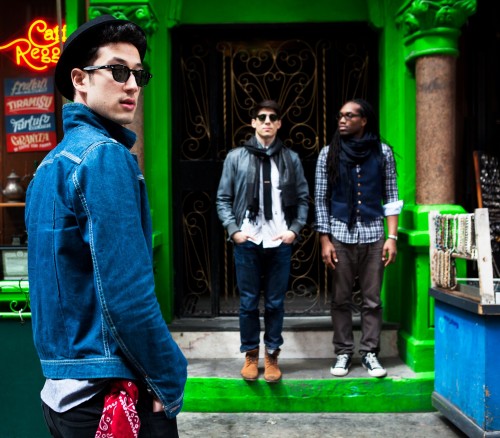 Smooth melodic vocal lines in the spirit of Amos Lee and Sara Barellies with a touch of soul and an energetic blend of folk-rock rhythms reminiscent of John Mayer — that’s what Andy Suzuki & The Method bring to the table.

The band, fronted by the songwriting trio Andy Suzuki, Jason Gorelick, and Kozza Babumba (the grandson of Grammy Award-winning Nigerian percussionist Babatunde Olatunji), is an independent New York City-based group that recently released their highly anticipated album Born Out of Mischief as a result of a crowd-funding effort.

In the fall of 2012 they played internationally with a wildly successful 3-week tour in Southeast Asia and now Andy and the guys are on a U.S. tour with a stop at Ebenezers Coffeehouse in DC this Friday night.

The band’s sound — especially on your most recent release Born Out of Mischief — has a catchy yet familiar feel to it. It’s a pop rock album with elements of folk. Who are your biggest influences and how do you pay homage to them in your music?

We feel like we have finally found our sound in Born out of Mischief. A little bit of folk. A little bit of pop-rock. With a little but of a country-bluesy vibe. As far as our influences, they are all over the map, but to pick a few. We love how Ben Howard creates bridges through builds and repetition. We love how Amos Lee makes everything sound soulfully-bluesy. And we love how Peter Bradley Adams arranges his songs to sound incredibly lush. Hopefully you can hear some of these influences in our Born out of Mischief. We also kinda like to think of ourselves as similar to Tracy Chapman. But a little more Asian. And a little more country.

What’s your process like while writing new material and how has that process evolved since you first started composing songs?

Born out of Mischief is the first album that we wrote together. On the first two albums, Andy would write the songs, and bring them to the band, basically as finished products. This time around, it was a much more comprehensive process. The three of us wrote the songs together, and then rewrote the weak parts, and then only picked the best songs to record. The writing process took almost a year of nitty-gritty work, getting our hands really dirty. With music mud.

Your YouTube channel is flooded with quality covers of songs by some of your favorite artists. Which artist(s) would you tour with if you could and what would be your dream song to collaborate with them on live during that tour?

We’ve always dreamed about touring with John Mayer. A lot of people talk smack about him based on the questionable (at best) stuff he has said/done, but when that man is on stage he truly kills it every night. We used to do a cover of ‘Gravity’ – playing that live with him on stage would be unreal.

In the age of iTunes and social media, how do you find yourselves defining success as independent artists and what are your goals as a band?

Our goal is to spread our music and our movement to as many people as humanly possible. We do that through playing shows and being active on social media, among many other things. Defining success is difficult. Although I know we have a long way to go and many more, much larger stages to play, I am proud of what we have achieved and created, and I do feel like we have already succeeded in what we have set out to do, however nebulous that sounds. We are super excited for the coming months, and all the successes that they will bring. Especially with the music videos we are about to drop. Get excited. Cuz we are.

Andy Suzuki & The Method are performing at Ebenezers Coffeehouse on Friday, September 27. Tickets are available online.