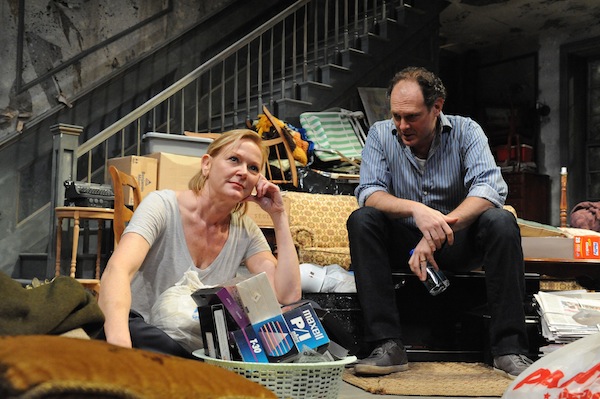 “I try to go back home to visit family when I can.”

These were the words spoken to me by my cousin, who was in Washington, DC attending a medical conference. We were enjoying the delectable cuisine of José Andrés at Jaleo, right down the block from where I would soon be reviewing Woolly Mammoth‘s latest production: Appropriate.

It only seems fitting that we had this conversation before I attended Appropriate‘s opening night. Branden Jacobs-Jenkins’s dramedy brings a family together in a situation similar to what my cousin and I discussed: taking care of the estate of their recently deceased father. Three siblings meet at the Southern plantation home of their late father to sell it off to the highest bidder in hopes of covering the debts and expenses he left behind. However instead of feeling a sense of unity through the ability to grieve with family, the three grow even further apart as their dysfunctional relationships have to support the weight of a startling discovery about their father. The ensuing drama will push and pull the audience in every direction.

Toni (Deborah Hazlett) has endured a lot of hardships up to this point. Her family is crumbling to ground. Her husband? Divorced. Her son? Kicked out of school. Her job? Lost. Her ability to survive to the point has turned her into a bitter soul and you can see it from the start. Her brother Bo (David Bishins) tries to clean up the mess left not only by their father but the seemingly incompetent efforts of Toni in organizing the liquidation and auction of the plantation.

Meanwhile the youngest brother Frank (Tim Getman), estranged due to past scandals, shows up out of the blue with a new hippie girl (Caitlin McColl) by his side. Frank says he’s back to make amends but Bo and Toni have their suspicions that he shows up just in time to see everything get sold for money.

Hidden motives and unresolved conflicts are main ingredients of a stew of a first act that is very shouty. Everyone feels slighted yet everyone feels like they are doing the right thing in regards to their father and their past.

What about that father? Well, the discovery of certain photos and artifacts brings to question a potentially racist past, one that would frame him as truly evil by today’s standards.

Jacobs-Jenkins does a wonderful job in setting up the drama with not only endless questions, but with just enough meat to satisfy any sort of conclusion you come to. Toni doesn’t want to face the possibilities the artifacts present but Bo’s wife Rachael (Beth Hylton) quickly recalls her experience with him that not only hints as him being a racist but also an anti-Semite (Rachael is Jewish). What’s the truth? We’ll never know.

The performances from the cast are solid from the adults down to the children (Cole Edelstein, Eli Schulman, Maya Brettell, Josh Adams). The story is compelling the but show still needs some polish. Personally I felt that the balance of comedy and drama really clicked in the second act but was set-up by a first act that was perhaps too bombastic. While the execution was fantastic (great set by Clint Ramos, suburb sound design by Broken Chord), the show needs more of that second half cohesiveness throughout.