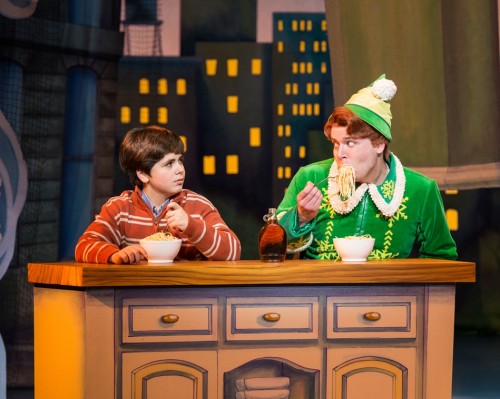 Noah Marlowe and Will Blum in Elf at the Kennedy Center. Photo credit: Amy Boyle

There is something about the holidays that brings families to the theatre. People who don’t see live theatre the other 364 days of the year seem to revel in one annual trip with the children and in-laws to see actors sing and dance to melodies rife with sleigh bells and falling snow. Although there are a number of movies about Christmas, stage options until recently were very limited. There was A Christmas Carol, Miracle on 34th Street, and White Christmas. Whether it was because repeated viewings of these shows is extremely monotonous or just because other movies leant themselves to being musicalized, Broadway has recently introduced three new shows into the holiday canon. Now families across America, in taking their annual jaunt to the theatre can also see How the Grinch Stole Christmas, A Christmas Story or Elf. For DC area residents, this year’s musical offering is the latter, based on the 2003 movie starring Will Ferrell as Buddy, a human raised as a Christmas elf who goes to New York City to meet his father, a high-powered book publisher with no holiday spirit. Although closely following the cinematic story, the musical stage version of Elf, playing at the Kennedy Center, doesn’t try to imitate the film, but provides its own take on the story and makes for a very fun family outing.

Being a fan of the film, but not wanting to just see a stage production mirroring the same thing I can see on DVD, I was pleasantly satisfied that Elf was able to keep the integrity of the plot, characters, and humor while, at the same time, giving each of those elements a fresh lift.

The plot, for example, while holding on to the same framework originally written by screenwriter David Berenbaum, was offered some small, but effective tweaks by stage writers Thomas Meehan and Bob Martin. In the film, Buddy ruins his father’s career by insulting a diminutive famous children’s book author (played by Peter Dinklage) and calling him a Christmas elf. On stage, this same result was obtained by having Buddy (played by Will Blum) accidentally shred an original book manuscript authored by a famous deceased writer because the paper in the machine turned into “snow”. Likewise, the relationship between Buddy and department store elf Jovie (played in the film by Zooey Deschanel and in the musical by Lindsay Nicole Chambers) is fleshed out in greater detail on stage than on screen. In the film, Buddy’s childlike innocence charms Jovie on their first date and after that, they remain a couple, with Jovie assisting Buddy help New York City renew a collective holiday spirit at the end of the film. On stage, after Buddy not only stands up Jovie for a date, but fails to deliver on his promise to get them into dinner at Tavern on the Green, Jovie breaks up with Buddy, only to reconnect with him near the end as she realizes he wasn’t being mean, he was just trying to save Christmas.

Blum, in his portrayal of Buddy the Elf, gave a commendable performance. To walk in the footsteps of Will Ferrell, whose portrayal has become iconic, without mimicking or losing the charm Ferrell brought to Buddy, is challenging. But Blum was able to successfully create a sugar-loving, eternally happy Buddy that was unique and completely his own, while finding small ways to pay homage to Ferrell’s film portrayal. His enthusiasm over things like the food carts in New York City and holiday decorations were given much the same level of endearing outlandishness as the film Buddy, although his level of innocence at all things human and urban seemed less believable than his movie counterpart’s portrayal. Still, Blum has a great singing voice and his interpretation of Buddy was likeable and charming. Chambers, as Jovie, and Larry Cahn, as Buddy’s dad, Walter, gave stand-out performances as well, finding ways to honor their screen characters without resorting to mere imitations.

In a world where Santa Claus is real and a Christmas elf can journey via iceberg from the North Pole to New York City, it only makes sense that singing and dancing would be a natural fit. Composer/lyricist team Matthew Sklar and Chad Beguelin (who turned Adam Sandler’s The Wedding Singer into a stage musical in 2006) have written clever songs like Sparklejollytwinklejingly that, although a bit corny at times, perfectly fit the nature of a show that embraces its light-heartedness. Considering this, it was surprising, therefore, to find such beautiful ballads as well, like Never Fall in Love [with an Elf] and [Santa] I Believe in You that were both emotionally moving and amusing at the same time.

The beauty of Elf the musical was that it reminded me why I enjoyed the film without being the film. By combining good music with loveable characters, a fun story, and a ton of holiday spirit, Elf is certainly worthy of becoming an annual family holiday tradition. Fans of the movie will enjoy that it’s the same beloved story of Buddy the Elf. And those who aren’t will appreciate that this isn’t the movie. It’s a fresh take on a sparklejollytwinklejingly holiday tale.