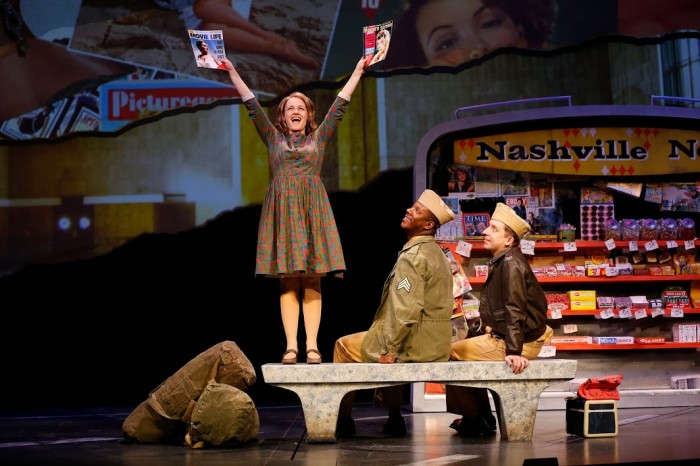 Erin Driscoll as Violet with Kevin McAllister and James Gardiner in the Ford’s Theatre production of the musical “Violet,” directed by Jeff Calhoun. Photo by Carol Rosegg.

When the entire plot of a two-act show centers around the emotional scars present due to a very large physical scar and said scar (or even hint of it) is not actually present on the face of the leading character, who spends more than two hours on stage focusing solely on the fact that the invisible scar ruined her life, I have a hard time being sympathetic. When the same character continues to verbalize how ugly she is and then repeatedly and ignorantly insults an African-American man, who is always kind to her, for his physical appearance, I have a hard time respecting her. When she then engages in a sexual fling with his white army buddy who is cruel and disrespectful to her, and Act I ends with her naively believing that she has found love in this meaningless one-night stand, I have a hard time understanding her.

In Act II, when the protagonist’s deceased father appears to her in a vision of sorts to aid in her emotional healing and all she does is blame him for making her ugly (it was his loose axe blade that caused her physical deformity in the first place), I have a hard time even liking her. And then, after both the vision of her father and her journey to a faith healer fail to heal her physical or emotional scars, she is met at the bus station by the two servicemen who both profess their love to her. When this happens, with no explanation why the cruel man has changed his tune or why the kind man would want to be with a woman who has been so awful to him, I have given up.

Such was my experience with Violet at Ford’s Theatre. Although most of my criticism stems from blaring gaps and issues with writing team Brian Crawley and Jeanine Tesori’s script and director Jeff Calhoun’s failure to clarify some of these issues, the decision to not give actress Erin Driscoll, who plays the 25-year old Violet, the massive scar around which the entire show revolves meant that from the opening moment of the show, I was dismayed.

The fact that the production team and director deliberately chose to not have a physical manifestation of the most integral prop in the show– the scar– was a huge disservice to the show and to the performers. Without it, Driscoll’s insecurities, complaints, and anger over her hideous appearance made her seem like a whiny, entitled brat. To hear a beautiful and physically flawless woman do nothing but lament about the fact that she’s not pretty was obnoxious, rendering her completely unsympathetic. Not only do I not believe that she is ugly, I’m annoyed by the fact that she does. And when the pretty and unsympathetic Violet tells the sympathetic Flick (played by Kevin McAllister) that he is ugly because his skin is dark, it sounded so cold, cruel, and racist that she became truly unlikeable.

Once I not only lost any sympathy for her, but began to also dislike her, I felt no desire to root for her success on her journey. To spend all her money to visit a faith healing preacher when the only thing that seems to need healing is her ego just seemed ridiculous and pointless. At no point in the show is Violet a character worth liking, which makes the final scene, where Flick admits his love for her, very confusing. Not only could I not understand why a man who has been belittled and dehumanized by Violet would want to be with her, but it wasn’t clear where her change of heart happened that allowed her to see past her own bias against him. Had there been an actual reason to feel sympathy for her, this realization that a person’s worth is more than skin-deep might be somewhat understanding and effective. But without feeling anything but disdain for the superficial Violet, her immediate redemption as a caring, feeling human being made no sense and, indeed, fell flat.

To have an entire show’s plot based on one important element and then fail to actually include that fundamental element in your show was a complete failure. And the biggest casualty in this tragedy was, unfortunately, the very talented Driscoll whose great singing and acting talents couldn’t compensate for the fact that without a scar, the beautiful flawless girl wanting to be even more beautiful becomes just a whiny narcissist. Considering the odds she was up against, her performance was commendable. To be an attractive actress trying to play the role of a hideously deformed woman without being made to look hideously deformed is a challenge and although she really gave a solid performance, it wasn’t enough to compensate for the abundance of character flaws and she never, therefore, won me over.

McAllister did win me over, though, with his sympathetic portrayal of Flick and his golden singing voice, although he was so charming in the role, it was difficult to understand why he would choose someone so unlikeable as Violet to love. Other standouts were Kellee Knighten Hough as Lulu, a singer in the church choir who turned a bit part into a very memorable character, and Chris Sizemore, who played six separate characters with such charming variety and diversity that I was unable to tell that they were all played by the same actor.

The reason to see Violet at Ford’s Theatre is for the 13 fine performers on stage who form a nice ensemble and the brilliant set design of Tobin Ost whose rotating multi-use pieces being transformed from scene to scene was the most exciting part of the show. Overall, though, Violet is very flawed. Or rather, she needed to be.