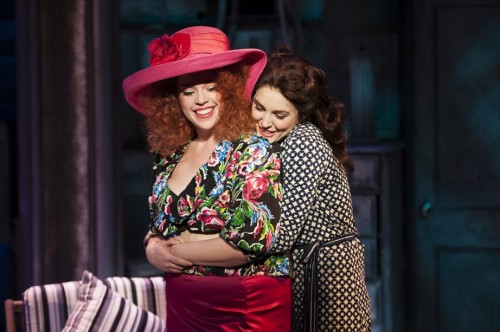 For a number of years, Broadway musicals based on their respective movies have been a staple on the Great White Way. In fact, more than one-third of the musicals currently on Broadway were films before they were ever stage productions. While some of these live adaptations fare very well with audiences, producers often find that taking a beloved film, musicalizing it, and then putting it on stage is a risky venture. One of the major reasons new productions are put through a series of workshops and premieres before opening on Broadway, in fact, is to gauge the potential success it will have and to edit and make changes along the way.

Signature Theatre has been instrumental over the years in assisting these budding new shows find footing by producing their world premieres in its Arlington facility, with almost 40 productions to date, including their current musical, Beaches. Based on Iris Rainer Dart’s 1985 novel, which the 1988 film with Bette Midler and Barbara Hershey was adapted from, Beaches follows two friends through a 30-year friendship. One a brash performer, the other a WASP-y blueblood, these seemingly different women forge a powerful companionship when a chance meeting on the beach as young girls in the 1950s leads to a lifelong friendship that tests the bonds of sisterhood and shows the strength of friendship.

Those familiar with the novel or the film will find few surprises in the plot of Signature’s stage adaptation, which sticks closely to Dart’s tale, urging the ushers and ticket takers at the door to remind audience members to “bring the tissues.” Dart herself, along with Thom Thomas, wrote the script for the show and neither she, nor director Eric Schaeffer make an effort to spare the audience from the sorrowful ending. Neither do they dwell on it, however, focusing instead, as the film does, on the hope of a new generation of friendship and love. While I loved that this was the focus of the ending, I was disappointed that there was not a final moment between Cee Cee (played by Alysha Umpress) and Bertie (Mara Davi). Bertie’s death is signified to Cee Cee through a simple nod by the hospice nurse (Bayla Whitten), robbing the audience of that final, yet potentially painful, goodbye between best friends.

Being a world premiere production, Beaches is still very much a work in progress which means that Schaeffer, and his creative team, including choreographer Dan Knechtges and musical director Gabriel Mangiante, were still playing around with the show, adding, cutting, and rearranging the various elements up until they set the show on March 1, just in time for its opening. That being said, Beaches does not feel like a workshop production or a show in its infancy. Rather, it reads like a tried and tested show, with a weight and maturity usually associated with a long production history. The fact that the plot has remained virtually intact through its many iterations helps with this. Yet despite having a known story, the new elements, including composer David Austin’s music had a wonderful sophistication not often found with a show’s initial production.

Fans of the film or novel, who are expecting to hear the familiar strains of Wind Beneath My Wings will be elated, since Signature’s production not only has the Grammy-winning song in it (incidentally, the only song in the show that is from the movie), but orchestrator Lynne Shankel and vocal arranger Austin have written an acoustic version that is even more beautiful than the original. Austin’s brand-new music was also impressive, not just because he has penned some powerful ballads, but because his tunes support the passage of 30 years. The show carries the audience from 1951 to 1983 and the musical numbers performed in their respective eras reflected the style of the time, from a more doo-wop rock ‘n roll sound in the 1950s scenes, to the disco of the 1970s and the vocal schmaltz of the 1980s.

Adeptly able to navigate through such a myriad of vocal styles is Umpress whose Cee Cee perfectly toes the fine line between paying homage to Midler (who played the role in the film) and making it her own. Her sultry voice was effortless and gorgeous, her acting impressive and her Cee Cee very likeable. Davi also is a wonderful singer, with a brighter sound than Umpress which provided a nice dichotomy between the characters—Cee Cee having the brighter personality, but darker voice and Bertie with the darker personality but brighter voice—the yin to one another’s yang. Davi and Umpress have a strong onstage chemistry which makes their friendship extremely believable and interesting to watch as it evolves and goes through challenges and trials. Even the young Cee Cee and Bertie, played by the fantastic Brooklyn Shuck and Presley Ryan, seemed genuinely connected to one another, making the simple origins of the friendship seem real and binding.

Like Cee Cee and Bertie’s friendship, the production, as a whole, is very real and seemingly simple, knowing that it took a lot of work to combine all the elements so beautifully. Without the spectacle and special effects common on so many Broadway stages, Dart’s lasting story, combined with Schaeffer’s superb directing, Austin’s remarkable music, a talented creative team, and solid cast results in a very impressive world premiere. Without needing much further editing or tweaking, Beaches should continue to have a long-lasting life onstage for years to come.