Let’s set aside for a moment that Snyder refuses to meet with tribal councils who oppose the name, including the still-open invitation from the Oneida Nation in New York. Snyder quickly jumped to the “hey, there’s more important issues to deal with than changing a football team’s name” defense, pointing out the horrific poverty rates, unemployment, poor health, and abysmal education found on many Native reservations. And yes, these are real problems. Big ones.

Changing the name would be a step in the right direction.

But Snyder, in his lovably (read: infuriating) sly and slick manner, forces you to think that you can only solve one or the other. Either change the name, or address these other problems is the implication. As CBS Chicago columnist Tim Baffoe says so eloquently, “Because sound logic dictates that we should ignore less significant issues that can easily be resolved in favor of the big ones that will take a whole lot of time and money to fix.” 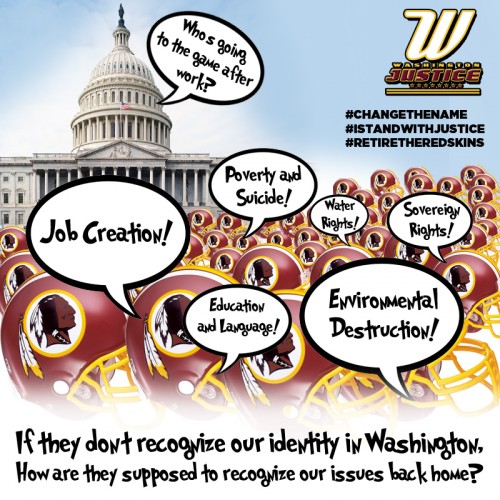 So to that end, Snyder pats himself on the back for his revelation experience, and shares his latest plan: the formulation of a charity (the Washington [slur] Original Americans Foundation) to dole out money and goods to tribes in need. And, I suspect, only to those who “agree 100%” with the team’s racist name. Oh, and notice the addition of “original Americans.” If the R-word name is meant to honor, then why not just call it the R-word Foundation?

This latest move by Snyder is tantamount to bribery, really. And obfuscation. What, we can’t demand the removal of something that symbolizes hundreds of years of rape, theft, and genocide just because you’ve now had your eyes opened and decided to help the poor and disenfranchised? It’s like saying it’s okay to go wear blackface to a costume party because you donate to the United Negro College Fund or the NAACP. While Snyder may claim a supermajority of acceptance from his hand-picked supporters, it’s clear a significant chunk of Indian Country disagrees with him.

I’m all for new avenues of assistance to the reservations; God knows every cent is sorely needed. But using this latest charity ploy as a deflection tactic to tacitly approve his stubborn insistence that the team’s name isn’t racist or derogatory is reprehensible.

But then again, this is Dan Snyder. And as we know, he’ll “NEVER” change. And you can put that in all caps, people.